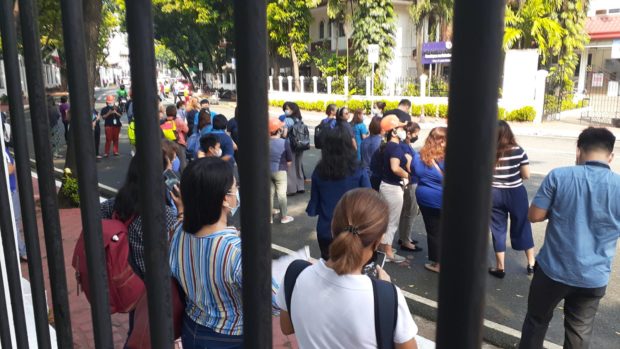 Palace employees leave the New Executive Building inside the Malacanang compound in Manila due to the earthquake. 📸: Contributed photos

MANILA, Philippines — Government employees had to leave their offices in a rush Wednesday morning after an earthquake hit parts of the country.

Palace employees at the New Executive Building in Malacanang compound in Manila evacuated to an open space following the quake.

Palace employees leave the New Executive Building inside the Malacanang compound in Manila due to the earthquake. @inquirerdotnet 📸: Contributed photos pic.twitter.com/c7Um1vGOtj

Staff and employees evacuate to the open parking area at the Senate compound in Pasay City following an earthquake that was felt in different parts of Luzon, including Metro Manila. @inquirerdotnet 📸: Office of Sen. JV Ejercito pic.twitter.com/VnkDpF77LP

The Ilocos Norte capitol employees were also asked to evacuate due to fears of possible aftershocks.

Ilocos Norte capitol employees asked to evacuate as the intense quake shook the area. Employees were ordered to remain outside for fear of aftershocks. 📷 Charisse Alvarez pic.twitter.com/d16YdDlNJg

According to the Philippine Institute of Volcanology and Seismology (Phivolcs), the magnitude 7.3 quake was recorded at 8:43 a.m.

Its epicenter located 20 kilometers southeast of Lagangilang in Abra and a depth of 25 kilometers, reported Phivolcs.

Phivolcs said damage and aftershocks are expected following the quake.

Are Filipinos prepared for the Big One?