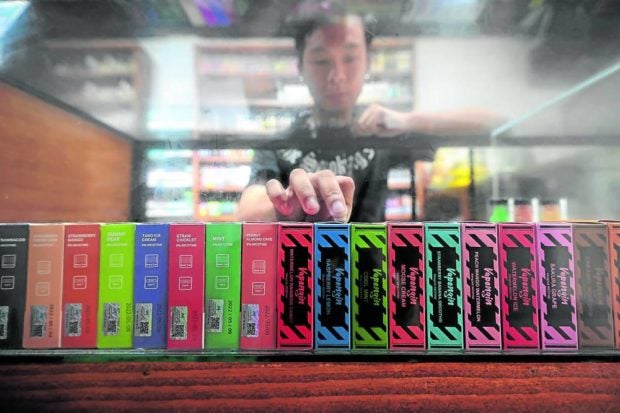 VAPE BOON | The vape industry is poised to welcome younger customers with the lapsing into law of a bill allowing 18-year-olds and above to buy and use vape products, like those being put on display by a worker at this shop on Kamias Road in Quezon City on Tuesday. (Photo by GRIG C. MONTEGRANDE / Philippine Daily Inquirer)

MANILA, Philippines — People as young as 18 years old may now legally smoke e-cigarettes and use other vaping products under the controversial vape bill that lapsed into law on Monday with neither a veto nor a signature from President Ferdinand Marcos Jr.

In a letter addressed to the Senate and the House of Representatives, Executive Secretary Victor Rodriguez said the Vaporized Nicotine and Non-Nicotine Products Regulation Act, which regulates the sale, promotion and packaging of vaping products and lowers the minimum age individuals may buy or use them from 21 years old to 18, became a law on July 25.

A bill automatically lapses into law if it is not signed or vetoed by the president 30 days after receiving the document.

The new law, ratified last January by the Senate and the House in the previous Congress, is seen to have wide health and trade implications in the Philippines, where an estimated 16.6 million adult Filipinos use tobacco, according to the Department of Health (DOH).

The measure effectively expands the vaping market to include more young people of the senior high school age. According to Department of Education (DepEd) figures, some 1.1 million students were in the 18-to-20 age bracket during school year 2020-2021.

“This is the number of learners who will become legally allowed to be marketed the harmful products once the bill becomes law,” a DepEd statement opposing the measure warned in March.

Based on its 2019 fact sheet on the Philippines, the Global Youth Tobacco Survey found that 14.1 percent of Filipino students age 13-15 “currently used electronic cigarettes.” Boys accounted for 20.9 percent of the figure, and girls 7.5 percent.

On Tuesday, Marcos’ decision to allow the vape bill to lapse into law dismayed its critics and puzzled its supporters.

Sen. Juan Edgardo Angara, the chair of the Senate finance committee, who had voted in favor of the bill, guessed that the president “did not see anything wrong with it, but he’s also not in favor” of the vape measure.

But Sen. Pia Cayetano, a public health advocate and a staunch opponent of the bill, pinned much of the blame on her colleagues in the previous administration.

“To say that I am disappointed in the 18th Congress that passed the bill, and with the president for not vetoing it, will not do justice to the millions of lives that will be put in harm’s way because of the vape law,” she said in an impassioned speech on the Senate floor.

“They have again fooled the people,” Cayetano said.

From FDA to DTI

The new law gives the Department of Trade and Industry (DTI) “regulatory jurisdiction” over vapes and other novel tobacco products, instead of the Food and Drug Administration (FDA).

The FDA earlier insisted it was “the rightful authority, possessing the expertise, competencies and manpower to develop standards, to regulate and monitor novel tobacco products.”

The FDA, the DOH and the DepEd had all urged the president to veto the measure.

“By lowering the age of access to vapor products from 21 to 18 years old, allowing flavorings, and permitting advertising and sponsorship strategies, the bill, when passed into law, will expose our youth to harmful and addictive substances by making vapor products enticing and easily accessible,” the DOH said in December.

The FDA also said claims that vapor products and other heated tobacco products were substantially safer than conventional cigarettes were “misleading as these products contain harmful and potentially harmful constituents that are hazardous to human health.”

Can raise it at SC

In an earlier statement, the Philippine College of Physicians said it was prepared to question the constitutionality of the vape bill with the Supreme Court once it became law.

The law regulates the importation, manufacture, sale, packaging, distribution, use, and communication of vaporized nicotine or vape and nonnicotine products, including novel tobacco products.

It mandates the DTI to “consult” with the FDA in setting technical standards for the safety, consistency and quality of vape products.

The law also tasks the DOH to prescribe guidelines on the implementation of smoking and vaping restriction awareness campaigns.

The Senate and the House approved the bicameral version of the vape bill in January but it was only submitted to Malacañang for signature on June 24, three working days before the end of then President Rodrigo Duterte’s term in office.

ACT Teachers Rep. France Castro said the lapsing of the vape bill into law showed that Mr. Marcos “is protecting business interests even at the expense of the Filipino people’s health.”

Albay Rep. Joey Salceda, chair of the House ways and means committee, admitted he had misgivings about the law for allowing the DTI to regulate vaping products “when health concerns should be primarily with the FDA.” He also had doubts about the “harm reduction claims” for the products.

“That said, both chambers of Congress decided it, and the process must be respected,” he said.