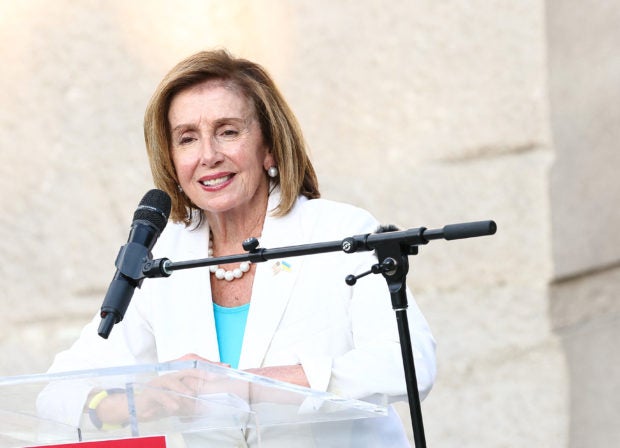 WASHINGTON — A potential visit to Taiwan by US House Speaker Nancy Pelosi is stirring alarm in President Joe Biden’s administration which fears the trip may cross red lines for China — and that there is no exit path.

China on Monday warned it was “getting ready” for a Pelosi visit to the self-ruling island next month and that the United States would “bear all responsibility for all serious consequences” if she goes.

Biden was open last week about concerns, saying the US military opposed travel by Pelosi, a fellow Democrat who is second in line to the presidency after the vice president.

Congress is constitutionally an equal branch of government with lawmakers free to travel where they wish. But the administration worries the nuance is lost on Beijing, which sees rising American support for Taiwan as part of a plot to push declared independence for the territory it claims.

The trip could come at an especially fraught time as President Xi Jinping, China’s most powerful leader in decades, prepares to cement his rule later this year at a major party meeting amid economic headwinds.

Pelosi has not confirmed a visit but told reporters last week it was “important for us to show support for Taiwan,” while denying Congress was pushing independence.

Taiwan enjoys bipartisan backing in divided Washington and China’s warnings have only fueled calls for Pelosi to go ahead.

“Speaker Pelosi should go to Taiwan and President Biden should make it abundantly clear to Chairman Xi that there’s not a damn thing the Chinese Communist Party can do about it,” Republican Senator Ben Sasse said.

The Biden administration has identified Beijing as the biggest global competitor but has also increasingly spoken of “guardrails” to prevent tensions from spiraling out of control, with the two powers’ top diplomats holding cordial talks this month in Bali.

The Biden administration faces “a real problem because if they back away, if they try to discourage Pelosi from going, they look weak and like they’re giving way to Chinese pressure tactics — and China is a bully,” said Robert Sutter, a China expert at George Washington University.

China has reacted inconsistently to congressional visits to Taiwan “but this one looks like it’s pretty serious,” he said.

“They might feel that they have to do something dramatic if Pelosi actually lands in Taipei.”

Ahead of the party meetings, Xi may calculate that the trip “has crossed his threshold” and it is time to show strength on Taiwan, Sutter added.

China’s defeated nationalists fled in 1949 to Taiwan, which has since grow into a flourishing democracy and technological leader. CIA chief Bill Burns said last week that Xi appears committed to the option of using force, despite lessons from Russia’s struggles in Ukraine.

The United States in 1979 switched relations from Taipei to Beijing and successive administrations have been careful to recognize only “one China” by not sending top-ranking officials to Taiwan.

A previous House speaker, Newt Gingrich, visited in 1997 but the Republican was from the rival party of the White House and Beijing’s reaction was relatively muted.

Gingrich on Monday criticized the Pentagon for warning against Pelosi’s visit, writing on Twitter: “If we are so intimidated by the Chinese Communists we can’t even protect an American Speaker of the House why should Beijing believe we can help Taiwan survive?”

Pelosi is a longstanding critic of China, befriending the Dalai Lama and in 1991 outraging her Beijing hosts by unfurling a banner in Tiananmen Square in memory of democracy protesters killed there two years earlier.

As Beijing rises, Washington has been shedding some earlier reticence on Taiwan. Biden has said the United States is ready to defend Taiwan militarily in an invasion — going beyond just providing weapons — although the White House has walked back his remarks.

Mike Pompeo, who was secretary of state under Donald Trump, on a visit to Taipei in March called on the United States to recognize the “unmistakable, already existent reality” of Taiwan’s independence.

Mark Esper, a defense secretary under Trump, said last week after his own visit to Taiwan that the One-China policy “has run its course,” noting that most Taiwanese no longer identify as Chinese.

But former national security advisor Condoleezza Rice, speaking after Esper at the Aspen Security Forum, said the One-China policy has “actually served us pretty well” by keeping down tensions.

“Let’s not make this into the Soviet Union 2.0. Let’s remember that this was a China that was on an integrationist path and still has actually a lot at stake in what happens to the international economy,” Rice said.