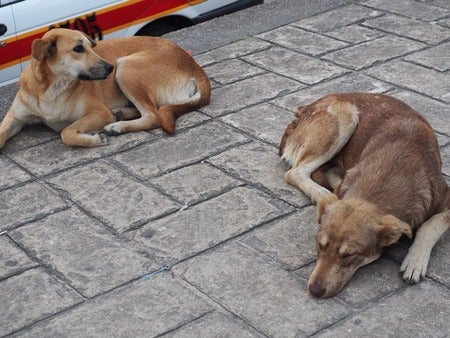 ILOILO CITY, Iloilo, Phiippines — Mayor Jerry Treñas of this city has called an investigation of the alleged euthanasia, or “mercy killing,” of stray dogs caught by the Iloilo City veterinarian’s office.

Treñas ordered the City Legal Office to conduct the probe, saying sanctions would be imposed on those who didn’t follow procedure in dealing with dogs.

“You know me. No one is above the law. We want to finish [the investigation] right away because we do not want to leave things hanging,” said Treñas during a press conference on Monday.

“I don’t think it’s a policy in the city to kill all the dogs. They (critics) can react however they want … I did not order (city veterinarian) Dr. [Tomas] Forteza [Jr.] to kill those dogs,” he added.

Forteza admitted in radio interviews over the weekend that 11 dogs were “put to sleep” at Barangay Navais in Mandurriao District, citing complaints from the barangay captain over fears that these canines could bite anyone and rabies might spread.

He cited two deaths due to rabies this year and infected patients bitten by stray dogs from the nearby Barangay Old Airport.

Forteza said they had to protect people against unwarranted animal bites.

“My thought was that if I didn’t act on it, and there was another positive [patient] bitten, that would be on my conscience. I am mandated by law to protect against rabies. I pushed through with that. I understand that there are negative ideas with the terms ‘put to sleep’ and ‘killed,’ but they have to understand that part of our role as city veterinarians is to protect them, because human life is more important,” he said.

“If they are complaining about mercy killing, how could we make the city safe, when no one is getting these [dogs] and adopting them? They will just keep complaining. We need to understand the public health aspect of this,” he added.

The killings of dogs by the city veterinarian office blew up when a resident of Barangay Navais, whose dog was among those killed, shared the incident to a friend who, in turn, complained to the animal rights group Strategic Power for Animal Respondents (Spar) in the Philippines.

Treñas said they were doing their best to ensure the safety of all dogs, including the strays.

He stressed the city pound has been caring for and feeding “a lot” of dogs but the city government has no intention to trim down the number by engaging in “mercy killing.”