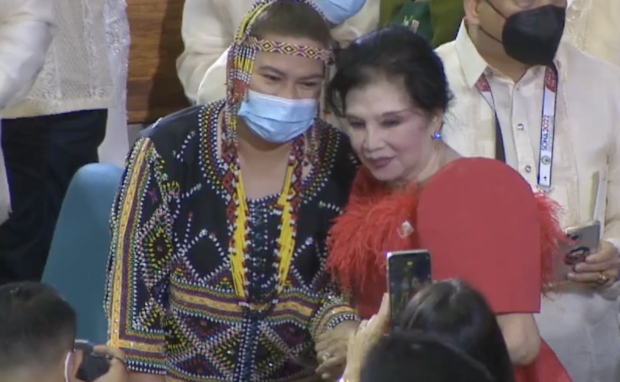 MANILA, Philippines — Vice President Sara Duterte on Monday praised President Ferdinand “Bongbong” Marcos Jr.’s first State of the Nation Address (Sona), the contents of which, she said, aims to continue the gains of the administration of her father, former President Rodrigo Duterte.

Duterte said she and her office supports the initiatives to continue her father’s work.

“It is laudable that this administration’s direction is working towards the continuation of the gains of former President Rodrigo Duterte, and the Office of the Vice President fully supports this,” she said in a statement.

Duterte said Marcos’ first Sona gave Filipinos a “glimpse” of what is expected of his administration and ways to help it achieve its development agenda and support its initiatives.

She vowed she will work with Marcos to attain its goals while “ensuring that the interest and the welfare of the Filipino people will come first before everything else.”

For her part, Duterte said she will give her 100% commitment to achieve the plans and programs under her office as the Vice President and Education Secretary.

For the Department of Education, Duterte said the department will implement the long-term remedy detailed by the Basic Education Development Plan 2030 (BEDP 2030).

This, she said, requires DepEd to collaborate with the national government, local government units, local communities, the private sector, and international partners to pool resources to increase investments in education that will benefit the entire education sector, particularly the students.

Meanwhile, the Office of the Vice President will roll out its social services programs to provide inclusive financial empowerment to women and members of the LGBTQ+ sectors, Duterte said.

She said her office will provide the said sectors with economic opportunities through the “Mag-Negosyo Ta ‘Day,” a program inspired by one she initiated in Davao during her stint as its mayor.

“It’s encouraging that President Marcos sees the importance of OVP programs that seek to address the needs of marginalized individuals, groups, sectors, and communities,” Duterte said.

“The days coming will be daunting for the administration of President Marcos and the Filipinos. But the nation, the Filipino people, is behind the President and his government,” she added.

“There is nothing that we cannot surmount if we continue to work together, united in our desire to see that the Philippines become a stronger nation,” she continued.

Duterte described Romualdez, a cousin of Marcos, as a “lawmaker tested by time,” citing the Speaker’s years of service as the Leyte representative.

“[This] gives me the confidence he will aggressively pursue a people-centered Congress,” she said.

“I am also hoping Speaker Romualdez will be able to consolidate support for the development agenda of President Ferdinand Marcos, Jr. from the rest of the country’s elected representatives — rightfully because the Marcos administration is resolute in improving the lives of the people, particularly those living in the countryside,” Duterte added.

Duterte also described Zubiri’s work ethic as “ompassionate, creative, and collaborative,” saying she has no doubt the Senate will work together support the administration’s development agenda.

“I also congratulate Sen. Juan Miguel “Migz” Zubiri for being elected as President of the 19th Senate. With his compassionate, creative, and collaborative way of working, I do not doubt that the 19th Senate of the Philippines will work together to support the President’s development agenda,” she said.