MANILA, Philippines — President Ferdinand Marcos Jr. arrived at the Batasang Pambansa in Quezon City on Monday afternoon for his first State of the Nation Address (Sona).

Marcos Jr. arrived at around 3:30 p.m. aboard a chopper. He was accompanied by Executive Secretary Vic Rodriguez.

According to Rodriguez, Marcos Jr. himself wrote his speech for his first SONA.

Rodriguez said the President’s speech will cover discussions during the first three Cabinet meetings of the administration as well as plans for the country’s economy and COVID-19 response. 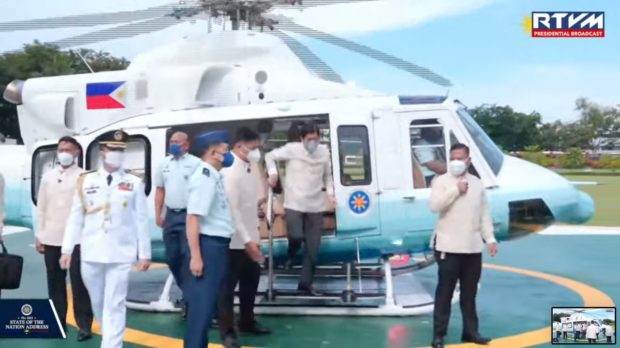 President Ferdinand Marcos Jr. arrives at the Batasang Pambansa in Quezon City for his first State of the Nation Address on Monday, July 25, 2022. Screengrab from RTVM

“It’s all about our economy, the economic plans. With the face-to-face opening of this coming school year, it’s all about COVID response,” said the Executive Secretary last week.

The COVID-19 response, he explained, does not just focus on health as it also extends to education and other sectors as well.

WATCH: What to expect in President Bongbong Marcos’ first SONA?

JUST IN: President Ferdinand "Bongbong" Marcos Jr. arrives at the Batasan Pambansa in Quezon City for his first State of the Nation Address. @inquirerdotnet pic.twitter.com/m4ugcD3qKN