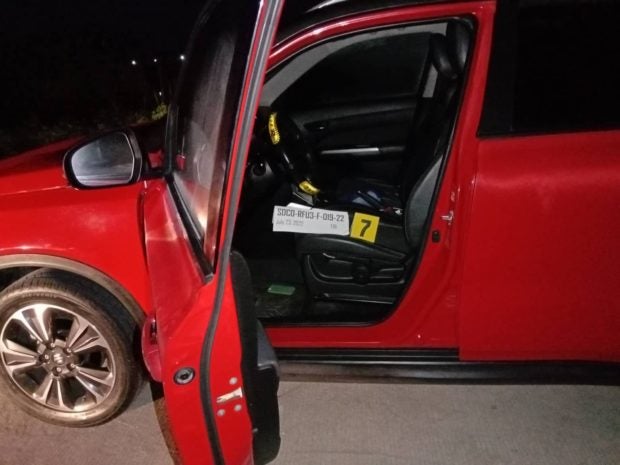 This vehicle was used by a Tarlac councilman during a buy-bust operation that allegedly turned into a shootout on July 23, with the police in Tarlac City. (Photo courtesy of Police Regional Office 3)

MABALACAT CITY, Pampanga—A councilman of San Sebastian village in Tarlac City was killed before dawn on Saturday, July 23, in an alleged “armed encounter” with the police at a bypass road in Ungot village in the city.

In a statement, the Police Regional Office 3 (PRO3) identified the killed councilman as Frank Martin Bonus, a “top priority regional high-value individual” in its campaign against illegal drugs.

“Upon sensing that he (Bonus) was dealing with lawmen, (the) suspect immediately drew his firearm and fired toward the operating troops, which caused the police officers to return fire and resulted in his instantaneous death,” the Central Luzon police said.

A netizen, who introduced herself as a parent of Bonus, reacted to the PRO3’s social media post about the alleged armed encounter, saying her son was not a drug peddler.

“My son was not a pusher! He was undergoing psychiatric treatment!” the netizen said in Filipino.

Bonus ran for councilor in Tarlac City in May 2022 elections under the Kilusang Bagong Lipunan but lost. He obtained around 12,000 votes. INQ

Read Next
Volcano erupts on western Japanese island of Kyushu, no reports of damage
EDITORS' PICK
Shop smarter with vivo’s big 12.12 holiday deals
The vivo Y02 is now available in the Philippines for only PHP 5,299
How not to retire as an ex-president
Hidilyn Diaz wins only gold missing from her collection
House energy committee chair Arroyo bats for cheap electricity
Lawmakers eyeing more changes in Maharlika plan
MOST READ
Jovit Baldivino, ‘Pilipinas Got Talent’ winner, dies at 29
LPA enters PAR, to likely strengthen into tropical depression in coming days – Pagasa
Andi Eigenmann, family in Manila for a quick visit; Ellie dines with grandma Jaclyn Jose
11 Filipino imports named to Japan B.League Asian All-Star team
Don't miss out on the latest news and information.