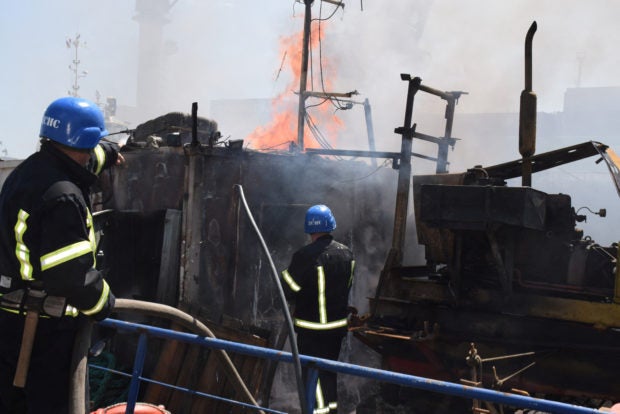 Firefighters work at a site of a Russian missile strike in a sea port of Odesa, as Russia’s attack on Ukraine continues, Ukraine July 23, 2022. Press service of the Joint Forces of the South Defense/Handout via REUTERS

KYIV — Ukraine was pressing ahead on Sunday with efforts to restart grain exports from Odesa and other Black Sea ports after a missile attack that cast doubt over whether Russia would honour a deal aimed at easing global food shortages caused by the war.

President Volodymyr Zelensky denounced the strikes on Odesa as blatant “barbarism” that showed Moscow could not be trusted to implement Friday’s deal, mediated by Turkey and the United Nations.

However, a government minister said preparations to resume grain shipments were ongoing, and public broadcaster Suspilne quoted the Ukrainian military as saying the missiles had not significantly damaged the port.

The deal signed by Moscow and Kyiv was hailed as a diplomatic breakthrough that would help curb soaring global food prices, but as the war entered its sixth month on Sunday there was no sign of a let-up in the fighting.

While the main theater of combat has been the eastern region of Donbas, Zelensky said in video posted late on Saturday that Ukrainian forces were moving “step by step” into the occupied eastern Black Sea region of Kherson.

Ukraine’s military on Sunday reported Russian shelling in numerous locations in the north, south and east, and again referred to Russian operations paving the way for an assault on Bakhmut in the Donbas.

The strikes on Odesa drew strong condemnation from the United Nations, the European Union, the United States, Britain, Germany and Italy. On Friday, U.N. officials had said they hoped the agreement would be operational in a few weeks.

Video released by the Ukrainian military showed firefighters battling a blaze on an unidentified boat moored alongside a tug boat. Reuters was unable to independently verify the authenticity of the video or the date it was filmed.

Turkey’s defense minister said Russian officials told Ankara that Moscow had “nothing to do” with the strikes. Neither Russian defence ministry statements nor the military’s evening summary mentioned missile strikes in Odesa. The ministry did not reply to a Reuters request for comment.

Two Russian Kalibr missiles hit the area of a pumping station at the port, two others were shot down by air defense forces, according to Ukraine’s military. Ukrainian air force spokesperson Yuriy Ignat said the missiles were fired from warships in the Black Sea near Crimea.

But Infrastructure Minister Oleksandr Kubrakov said on Facebook that “we continue technical preparations for the launch of exports of agricultural products from our ports”.

The deal would restore grain shipments from the three reopened ports to pre-war levels of 5 million tonnes a month, U.N. officials said. 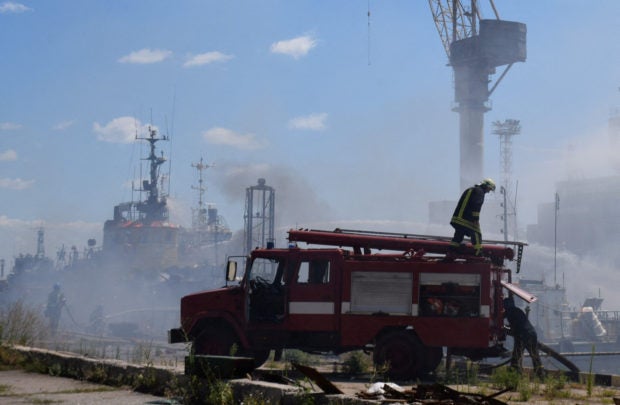 Firefighters work at a site of a Russian missile strike in a sea port of Odesa, as Russia’s attack on Ukraine continues, Ukraine July 23, 2022. Press service of the Joint Forces of the South Defense/Handout via REUTERS

The strikes appeared to violate Friday’s deal, which would allow safe passage in and out of Ukrainian ports.

Zelensky vowed to do everything possible to acquire air defense systems able to shoot down missiles like those that hit Odesa.

A blockade of Ukrainian ports by Russia’s Black Sea fleet since Moscow’s Feb. 24 invasion has trapped tens of millions of tons of grain and stranded many ships.

This has worsened global supply chain bottlenecks. Along with Western sanctions on Russia, it has stoked food and energy price inflation. Russia and Ukraine are major global wheat suppliers, and a global food crisis has pushed some 47 million people into “acute hunger,” according to the World Food Program.

Moscow denies responsibility for the food crisis, blaming Western sanctions for slowing its food and fertilizer exports and Ukraine for mining the approaches to its ports.

U.S. Secretary of State Antony Blinken said in a statement that the attack on Odesa “casts serious doubt on the credibility of Russia’s commitment to yesterday’s deal.”

“Russia bears responsibility for deepening the global food crisis and must stop its aggression,” he added.

Turkish Defense Minister Hulusai Akar said in a statement: “The Russians told us that they had absolutely nothing to do with this attack … The fact that such an incident took place right after the agreement we made yesterday really worried us.”

Ukraine has mined waters near its ports as part of its war defenses, but under the deal pilots will guide ships along safe channels.

A Joint Coordination Center staffed by members of the four parties to the agreement are to monitor ships transiting the Black Sea to Turkey’s Bosporus Strait and off to world markets. All sides agreed on Friday there would be no attacks on these entities.

Putin calls the war a “special military operation” aimed at demilitarizing Ukraine and rooting out dangerous nationalists. Kyiv and the West call this a baseless pretext for an aggressive land grab.