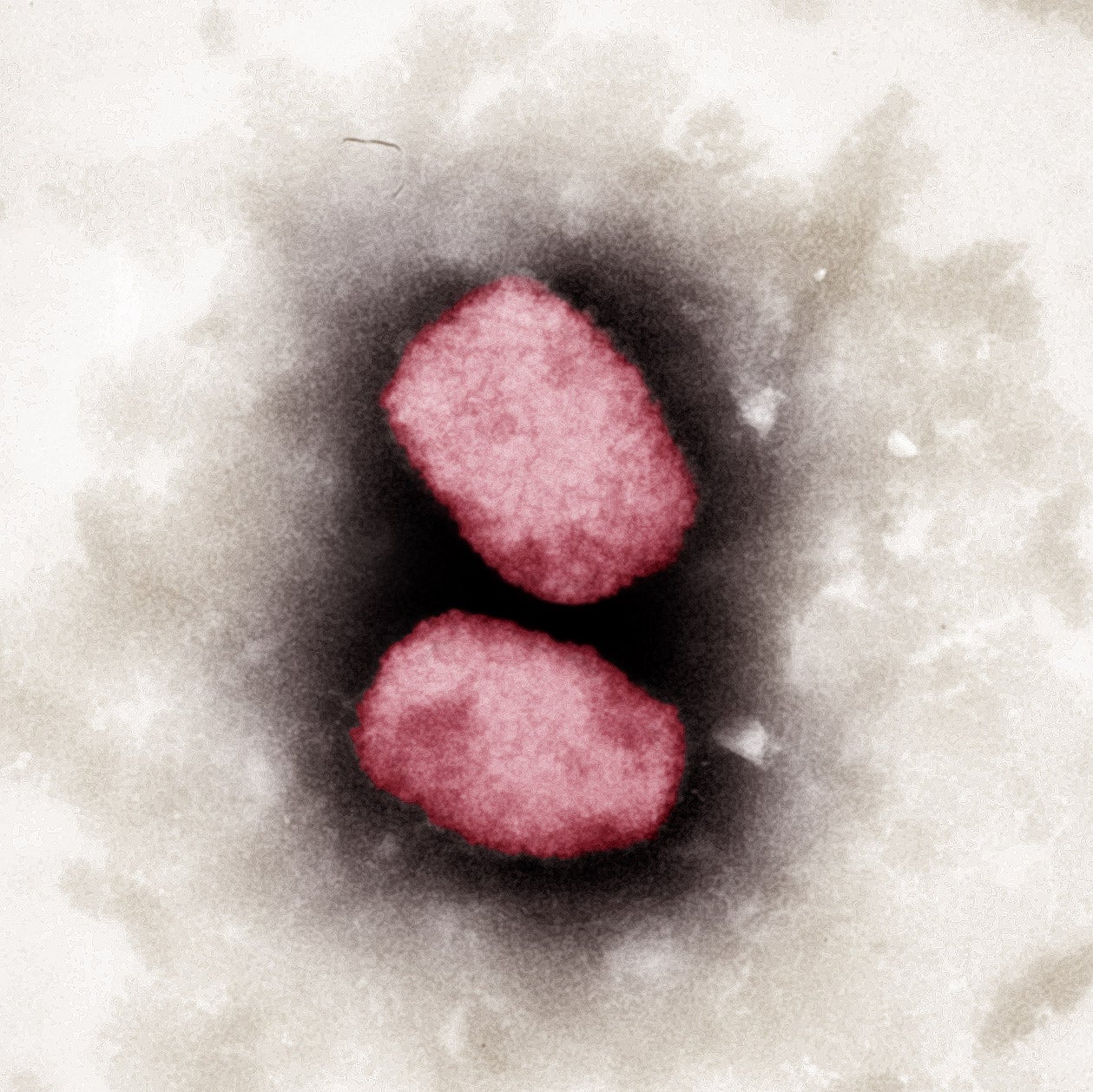 This handout photo taken in the year 2001 and received on May 23, 2022 from the Robert Koch Institute (RKI), the German federal government agency and research institute responsible for disease control and prevention, shows a colored electron-microscopic capture of the monkeypox virus. (Photo by Andrea MAENNEL and Andrea SCHNARTENDORFF / RKI Robert Koch Institute / AFP)

GENEVA — Faced with a surge in monkeypox cases, the head of the World Health Organization is  Saturday expected to declare if the agency has decided to  classify the outbreak as a global health emergency — the highest alarm it can sound.

Tedros Adhanom Ghebreyesus will address a virtual press conference at 1300 GMT, the WHO announced in a statement late Friday.

It did not reveal what would be announced.

Monkeypox has affected over 15,800 people in 72 countries, according to a tally by the US Centers for Disease Control and Prevention (CDC) published on July 20.

On June 23, the WHO convened an emergency committee (EC) of experts to decide if monkeypox constitutes a so-called Public Health Emergency of International Concern (PHEIC) — the UN health agency’s highest alert level.

But a majority advised the Tedros that the situation, at that point, had not met the threshold.

The second meeting was called on Thursday with case numbers rising further, where Tedros said he was worried.

“I need your advice in assessing the immediate and mid-term public health implications,” Tedros told the meeting, which lasted more than six hours.

A US health expert sounded a grim warning late Friday.

“Since the last #monkeypox EC just weeks ago we’ve seen an exponential rise in cases. It’s inevitable that cases will dramatically rise in the coming weeks & months. That’s why @DrTedros must sound the global alarm,” Lawrence Gostin, the director of the WHO Collaborating Center on National and Global Health Law, said on Twitter.

“A failure to act will have grave consequences for global health.”

Ninety-five percent of cases have been transmitted through sexual activity, according to a study of 528 people in 16 countries published in the New England Journal of Medicine — the largest research to date.

Overall, 98 percent of infected people were gay or bisexual men, and around a third were known to have visited sex-on-site venues such as sex parties or saunas within the previous month.

“This transmission pattern represents both an opportunity to implement targeted public health interventions, and a challenge because in some countries, the communities affected face life-threatening discrimination,” Tedros said, citing concern that stigma and scapegoating could make the outbreak harder to track.

“I am acutely aware that any decision I take regarding the possible determination of a Public Health Emergency of International Concern involves the consideration of many factors, with the ultimate goal of protecting public health,” he added.

The European Union’s drug watchdog on Friday recommended for approval the use of Imnavex, a smallpox vaccine, to treat monkeypox.

Imvanex, developed by Danish drugmaker Bavarian Nordic, has been approved in the EU since 2013 for the prevention of smallpox.

It was also considered a potential vaccine for monkeypox because of the similarity between the monkeypox virus and the smallpox virus.

The first symptoms of monkeypox are fever, headaches, muscle pain and back pain during the course of five days.

Rashes subsequently appear on the face, the palms of hands and soles of feet, followed by lesions, spots and finally scabs.