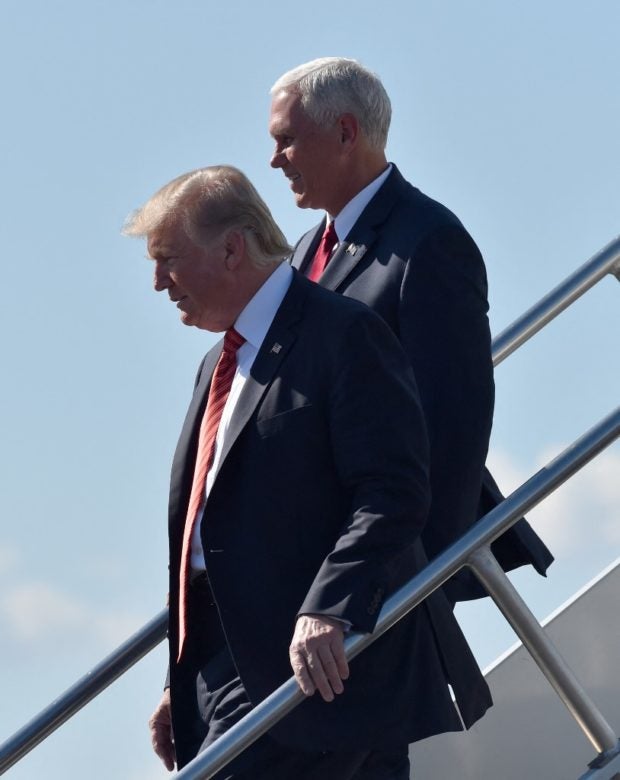 US President Donald Trump is welcomed by US Vice President Mike Pence (R) as Trump arrives in Phoenix, Arizona, for a “Make America Great Again” rally on August 22, 2017. (Photo by Nicholas Kamm / AFP)

The convergence of campaign events came a day after a congressional hearing on the US Capitol assault, in which a White House security official said members of Pence’s Secret Service detail feared they would die as rioters stormed the building.

Trump, who like Pence is considering running for president in 2024, has savaged his former vice president for what he describes as a failure to block the certification of the 2020 election results and send the process back to the US states.

Such a plan had been cooked up by Trump aides who supported his discredited theory that the election was stolen, but Pence ultimately decided that the action would be illegal.

During the January 6, 2021 insurrection, Trump tweeted an attack on Pence, saying he “didn’t have the courage to do what should have been done to protect our country.”

Administration officials testified at Thursday’s hearing that the social media post poured fuel on the fire and turned rioters against the vice president.

In extraordinary revelations at the hearing, a White House national security official who testified under anonymity said “members of the VP detail at this time were starting to fear for their own lives.”

Trump’s gathering Friday in the central Arizona town of Prescott Valley was part of a series of “Save America” rallies he has held to boost his favored candidates ahead of Republican primary elections.

Earlier in July, he held an event in Alaska to support Kelly Tshibaka, a challenger to the state’s incumbent senator, Lisa Murkowski, who was one of the few Republicans to vote to impeach Trump after the January 6, 2021 insurrection.

In Arizona, a state he narrowly lost in 2020, Trump campaigned for Kari Lake, a far-right gubernatorial candidate who supports his false claim that the election was stolen.

The former president, leaving the crowd to wait more than two hours, began his speech by focusing on immigration — a major campaign topic in the state which shares a large border with Mexico.

But it did not take long before he turned his attention to the 2020 election.

“The election was rigged and stolen and now our country is being systematically destroyed because of it!” he shouted, with the crowd roaring in response.

Pence made stops in Phoenix and southern Arizona for governor-hopeful Karrin Taylor Robson, a more traditional Republican than Lake who also has the backing of the state’s term-limited governor.

With his rivalry with Trump intensifying, Pence has positioned himself as a principled, religious conservative. But he has declined to attack Trump directly.

In a 20-minute speech before a seated warehouse crowd on Friday, he lauded policy accomplishments during the “four years of the Trump-Pence administration,” and only took a brief swipe at Lake, criticizing her previous support of Democrats and initial opposition to Trump.

Later though, he issued an indirect condemnation of Trump and Lake’s fixation on the 2020 election.

“Democrats would love nothing more than for Republicans to take our eye off the ball and focus on days gone by,” he tweeted.

“If the Republican Party allows itself to become consumed by yesterday’s grievances, we will lose,” he added.

Pence has brushed aside talk of a potential 2024 run, saying his focus is now on the November 2022 midterm elections.