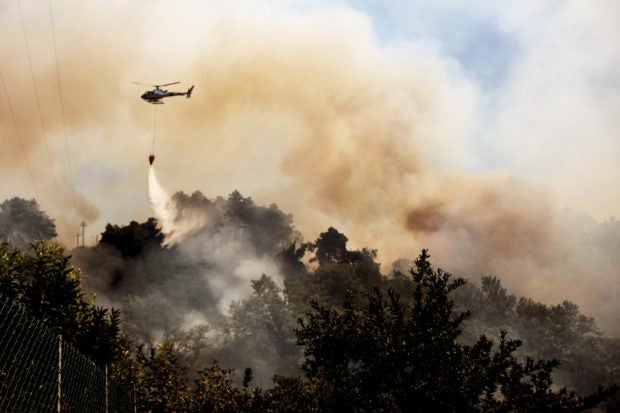 An helicopter drops water over a wildfire raging near the city of Massarosa, Tuscany region, central Italy, on July 20, 2022. (Photo by Federico SCOPPA / AFP)

Rome, Italy — Italy faced the hottest day of the current heatwave Friday with red extreme heat warnings issued for 16 cities across the country, as firefighters battled blazes up and down the country.

Worst hit is expected to be Milan in the north with temperatures hitting 40 degrees Celsius (104 Fahrenheit), while Bologna to its south and the capital Rome could hit 39 degrees, according to official government estimates.

Other major cities under a cautionary heatwave red alert for Friday and Saturday by Italy’s health ministry include Florence, Genoa, Turin and Verona.

On Thursday, the city of Pavia, just south of Milan, broke a record with thermometers hitting 39.6 degrees.

For three consecutive months — May, June and July — national temperatures have been at least two to three degrees above the seasonal average, and the trend should continue until early August, said national weather website ilmeteo.com.

Along with the heat have come hundreds of fires across Italy in recent weeks. The largest still raging Friday was in central Tuscany, where 860 hectares had burned since Monday in an area west of Lucca.

Over 1,000 people were evacuated Thursday.

On Friday, 87 firefighters were on the ground after another night spent battling the flames, helped by reinforcements from the Lombardy and Piedmont regions. Water dumps from helicopters were underway, authorities said.

Prosecutors in Lucca have opened an investigation over the cause of the fire. 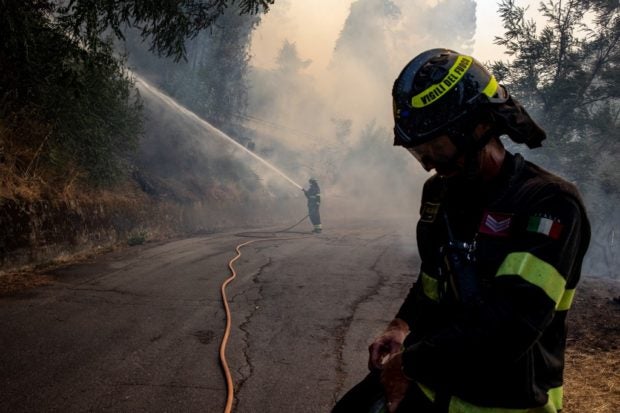 Firefighters try to put down a wildfire raging near the city of Massarosa, Tuscany region, central Italy, on July 20, 2022. (Photo by Federico SCOPPA / AFP)

More contained was a forest fire that broke out Tuesday near Trieste, in Italy’s northeasternmost region of Friuli Venezia Giulia, sending flames and vast plumes of smoke across the border into Slovenia and displacing about 300 people.

The fire — which caused a 15-minute general blackout Tuesday in the city of Trieste — was now “substantially stable,” Deputy Governor Riccardo Riccardi said Thursday, adding that a cold front was expected on Tuesday.

Authorities had not yet calculated how many hectares had burned.

Firefighters said a female civil defense volunteer died while trying to fight the fire. Local media said she was killed by a falling tree.

Italy’s national firefighting corps say they have intervened in 32,921 wildfires from June 15 to July 21, or 4,040 more than in the same period last year.

Most have been in the southern regions of Sicily, Puglia, Calabria and Lazio, around Rome.

According to the specialized European monitoring service Copernicus, fires have ravaged 27,571 hectares so far this year in Italy.

Italy is “about to reach the maximum power of the African high pressure zone ‘Apocalypse 4800,'” said ilmeteo.it.

The name, it said, referred to the thermometer dropping below zero degrees only at altitudes above 4,800 meters (15,748 feet) — corresponding to the highest peak of the Alps, at Mont Blanc along the French-Italian border.