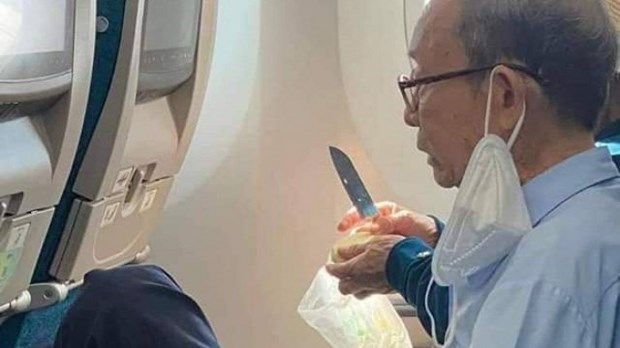 The passenger used the knife to peel fruit on the plane. – Viet Nam News/Asia News Network

HO CHI MINH CITY — The administration of Tan Son Nhat International Airport in Ho Chi Minh City has suspended a security screening officer for failing to detect a passenger bringing a knife in her carry-on luggage onto a plane.

The passenger used the 20cm knife to peel fruit while aboard a plane, violating flight safety and security regulations.

The incident took place on flight VN208 from Ho Chi Minh City to Hanoi on July 18.

The Southern Airport Authority said during the screening process, the officer failed to detect the knife which was put in a hard-to-see position in her hand luggage.

The camera system showed that the officer had followed regulations when conducting the screening.

However, the aviation authorities said ensuring security was the top priority.

Current regulations prohibit passengers from carrying razors, paper knives, knives with blades (excluding the knife handle) longer than 6cm and knives with handle and blade over 10cm long in their carry-on luggage.

Under the current regulations, the screening officer will be subject to a fine of 1-3 million dong (US$42-128), depending on the level of the infringement.

If his act was found to threaten aviation security and safety, he will be fined up to 10 million (US$426).

The Civil Aviation Authority of Vietnam (CAAV) has reported the case to the Ministry of Transport and committed to take measures to not let such an incident happen again.

Immediately after the incident, the CAAV asked the administration of Tan Son Nhat International Airport to investigate and take preventative measures.

The CAAV said the case violated aviation security regulations although it did not cause serious consequences and did not threaten aviation safety.

It added that the incident also demonstrated the lack of awareness of many passengers who still bring banned items on flights, causing pressure for screening officers.