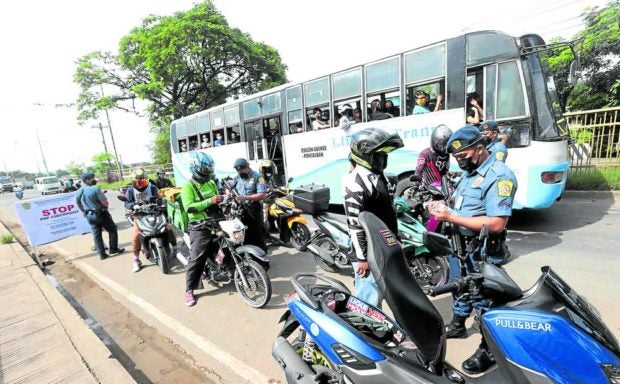 CHECKPOINT | The road to Batasang Pambansa is tightening up, as Quezon City policemen stop motorists along the Batasan-San Mateo Road near the House complex on Wednesday, ahead of President Marcos’ first State of the Nation Address on Monday. (Photo by NIÑO JESUS ORBETA / Philippine Daily Inquirer)

MANILA, Philippines – With some 1,300 guests in attendance and a movie director running the show, the first State of the Nation Address (SONA) of President Ferdinand Marcos Jr. on Monday will be “simple and very traditional,” stripped of the glitz the annual event was known for before the pandemic.

“Malacañang wants the event to be simple, more of a very traditional SONA. The president wants it to be simple, not much glamour, just a simple affair,” the House secretary general, Mark Llandro Mendoza, said on Wednesday.

The nod to tradition was to be expected as it was Marcos’ father and namesake who started the custom of presidents addressing Congress at the Batasang Pambansa complex in Quezon City on the first day of session every fourth Monday of July.

Before that, the date and venue of the SONA had varied from president to president, according to the Official Gazette.

In an interview, Mendoza said preparations for the SONA were moving smoothly with about 70 percent of 1,360 invitees intending to come.

Former Presidents Joseph Estrada and Gloria Macapagal-Arroyo have confirmed their attendance, and so have members of the diplomatic corps, according to the House official.

Vice President Sara Duterte will also be there in person for Marcos’ first SONA, Mendoza said.

As in the previous administration, Marcos’ first SONA will be shot and directed by a filmmaker. According to an ABS-CBN report, director Paul Soriano, the nephew of first lady Liza Araneta-Marcos and a vocal supporter of the president, has been given the task.

“I am grateful and honored for this rare opportunity. Any time the president needs me, I will deliver and do my best,” he was quoted as saying in the report.

As for the preparations at the Batasan, Mendoza said: “We’re okay; it’s all systems go.”

“We already sent the invitations and the session hall will be ready by tomorrow (Thursday). Everything is okay. We’re [focused more] on the security preparations here at the House,” he said.

Simple cocktails will be served to guests after the president delivers his speech on Monday afternoon, after the opening of the session in the morning.

A choir from Marcos’ home region of Ilocos will sing the national anthem, “the only new addition to our program,” Mendoza said, adding that the rest of the arrangements were similar to previous SONAs.

While the SONA is a face-to-face event, a Zoom link will be made available for those who cannot attend in person.

Guests who will physically attend the event are required to present a negative result of a reverse transcription polymerase chain reaction test taken 48 hours before Monday.

Mendoza said there was ample room at the newly renovated House session hall, which used to have a capacity just enough for 315 House members.

At present, the plenary hall has 367 seats for lawmakers and 1,357 seats in the gallery.

“Now that we’re preparing for face-to-face sessions, the capacity is more than enough, we still have space,” Mendoza said, adding that the House spent more than P100 million for the renovation of the session hall.

As part of security preparations, the House complex will be locked down during the weekend.

Outside the complex, demonstrators, whether pro- or anti-Marcos, will be banned from holding programs along Commonwealth Avenue, a traditional site for SONA protest activities, as it has been designated a “no-rally” zone.

“SONA is on a Monday, and the traffic there would be very heavy. So [barring protests along Commonwealth Avenue] would be for the benefit of the commuting public who are on their way to their work,” the spokesperson of the Philippine National Police (PNP), Col. Jean Fajardo, told a press conference on Wednesday.

But the progressive Bagong Alyansang Makabayan (Bayan) group said the PNP had no authority to declare Commonwealth Avenue a no-rally zone.

“It is only the [Quezon City local government unit] which is authorized to grant or deny a rally permit. The PNP should not usurp the mayor’s authority,” Bayan secretary general Renato Reyes Jr. said in a series of tweets on Wednesday.

Bayan filed a request to organize a rally along Batasan Road near the House complex, but City Hall has yet to approve any rally permit.

If denied a permit, according to the PNP, the groups may still gather at designated freedom parks, such as Quezon Memorial Circle, Liwasang Diokno at the Commission on Human Rights, or the University of the Philippines Diliman campus.

PNP allows Sona-related rallies inside UP Diliman, QC Circle if with permit