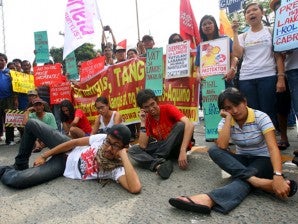 MANILA, Philippines—Stating that the truth hurts, retired Archbishop Oscar Cruz said Saturday Malacañang should not complain but should simply absorb the message of the latest protest gimmick of militants: “noynoying.”

Cruz, a known Aquino critic, said “noynoying”—a newly coined word that plays on the President’s  nickname and is used to describe a passive protest act of just lying down and doing nothing— was a jab at President Benigno Aquino’s supposedly “do nothing” leadership style which, he said, was “not altogether false.”

“The truth is painful. The new word could be annoying but it is not altogether false,” Cruz said in an interview.

“The reality in the word is what makes it rather interesting and relevant. Otherwise, it is not worth the ire or disgust of Malacañang,” he added.

Cruz said “noynoying” was “another novel expression in line with KKK” or the protest term for  “kaibigan, kaklase, at kabarilan (friends, classmates, and fellow gun enthusiasts)” coined by the President’s critics to describe close associates he appointed and retained in power despite controversies surrounding them.

“Instead of becoming angry, Malacañang should instead get the message behind the word and the gesture that goes with it,” Cruz said.