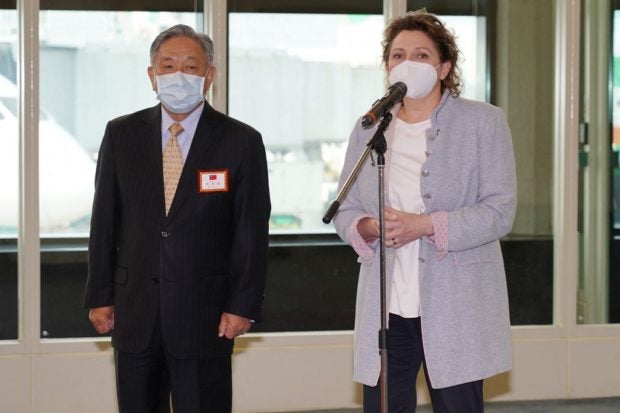 Taipei, Taiwan — Europe must support Taiwan’s democracy, a senior EU lawmaker said Tuesday at the start of a trip to the island, citing both Russia’s invasion of Ukraine and China’s crackdown in Hong Kong.

Nicola Beer, one of the European Parliament’s vice presidents, arrived for what Taiwan’s foreign ministry described as “the first official visit” by an MEP of her rank.

Beer told reporters just after touching down that “now is the moment to stand firm on the side of Taiwan,” calling Europe and the island part of a “family of democracies.”

“Taiwan’s bloom is also Europe’s bloom. We won’t have a blind eye on China’s threats to Taiwan. Europe was late for Hong Kong, we won’t be late for Taiwan,” she said, referring to Beijing’s recent dismantling of Hong Kong’s democracy movement.

Taiwan’s 23 million people live under the constant threat of invasion by authoritarian China, which claims the self-ruled island and has vowed to one day seize it.

Russia’s assault on Ukraine has deepened fears both within Taiwan and among key Western allies that Beijing might do the same under President Xi Jinping.

Beer’s visit is likely to upset China, which opposes any official exchanges between Taiwan and foreign politicians.

But Beer said “political need” brought her to Taiwan in her “official capacity.”

Last year, China condemned a visit to Taiwan by a European Parliament delegation led by French MEP Raphael Glucksmann, a vocal China critic who was among five lawmakers sanctioned by Beijing.

Beer, a lawyer and a member of Germany’s liberal Free Democratic Party, is scheduled to meet President Tsai Ing-wen and other top officials during her three-day visit.

In a separate visit to the island, former US defense secretary Mark Esper said during a meeting with Tsai on Tuesday the time had come for Washington to “move away from strategic ambiguity.”

The United States cut formal diplomatic relations with Taiwan in 1979 to recognize China, but is required by law to sell the island military supplies to ensure its self-defense against Beijing.

The US has since maintained “strategic ambiguity” as to whether it would intervene militarily on the island’s behalf, a policy designed both to ward off a Chinese invasion and to discourage Taiwan from ever formally declaring independence.

Esper said the biggest challenge for Western democracies “is not in Russia, it is here in Asia where China continues to challenge the rules-based international order,” threatening freedom-loving people in the region.

“If there is one issue that unites politicians in Washington DC, it is the view that China is a strategic challenge for our country and Taiwan is a good friend that we must support and defend.”