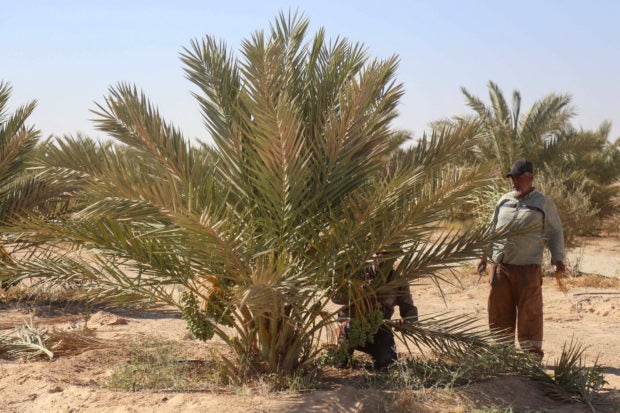 This picture shows a view of a palm field Iraq’s central city of Karbala, on May 20, 2022. AFP

KARBALA, Iraq — Thousands of young date palms, Iraq’s national symbol, form lines that extend from the edge of the desert near the central city of Karbala and into the horizon.

Iraq’s prized trees are central to a push aimed to preserve a long-threatened ancestral culture, whose fruit historically presented prosperity across the Arab world.

“The date palm is the symbol and pride of Iraq,” says Mohamed Abul-Maali, commercial director at the Fadak date plantation.

Once known as the “country of 30 million palm trees”, and home to 600 varieties of the fruit, Iraq’s date production has been blighted by decades of conflict and environmental challenges, including drought, desertification and salinisation.

The Fadak plantation, taking its name from a date-filled oasis central to Islam’s origins, is a 500-hectare (1,235 acres) farm operated by the Imam Hussein Shrine in the nearby holy city of Karbala.

Abul-Maali hopes the project, launched in 2016, will “restore this culture to what it used to be”.

The grove is a repository for “more than 90 date varieties, Iraqi but also Arab species”, from the Gulf and North Africa, he adds.

The Iraqi varieties are among “the rarest and best” and were collected from across the country.

Of the 30,000 trees planted at Fadak, more than 6,000 are already producing fruit, according to Abul-Maali.

He expects this year’s harvest to reach 60 tonnes, a threefold increase on 2021.

The rows of new trees at the Fadak farm stand in stark contrast to the state of plantations in other parts of the country. 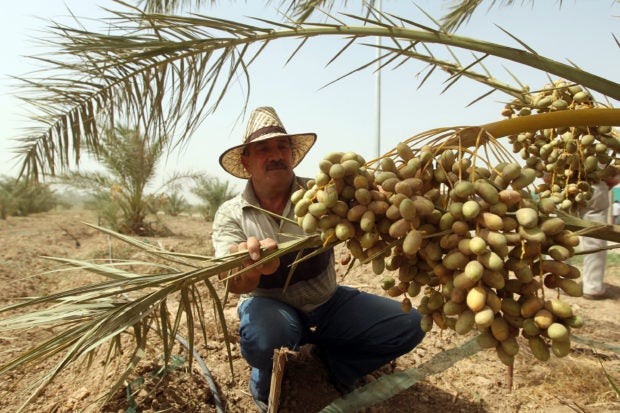 A farmer looks at the fruit of a small date palm on the outskirts of the capital Baghdad on August 9, 2011, as officials push for the re-planting programs for the country’s date palms, which are famed across the Middle East as the region’s best but have suffered terrible losses in past decades. AFP

The scene at Fadak with well-watered trees is far removed from the Basra region, once a centre of date production in southern Iraq.

Here the landscape is scarred with the slender trunks of decapitated palm trees.

In the Shatt al-Arab area, where the Euphrates and Tigris rivers meet, Baghdad razed entire tracts during its 1980-88 war with Iran.

Often the trunks of felled date palms were used to fill and bury irrigation canals that had dried up and become unused.

“It looks like a cemetery,” says agricultural engineer Alaa al-Badran.

According to him, the number of palm trees in the area has fallen from six million, before the Iraq-Iran war, to less than three million today.

Now “the salinisation of the waters of the Shatt al-Arab and of the land” poses an even greater challenge, Badran says.

“The solution would be drip irrigation and desalination systems. But that can be expensive,” says Ahmed al-Awad, whose family once owned 200 date palms in the area but only have 50 trees remaining.

“In the last 10 years we have gone from 11 million palm trees to 17 million,” says Hadi al-Yasseri, a spokesman for the minister.

A government programme to rescue the date palms was launched in 2010, but eight years later it was shelved due to a lack of funds, says Yasseri.

But he expects it to be relaunched, as new funds are due to be included in the next government budget. 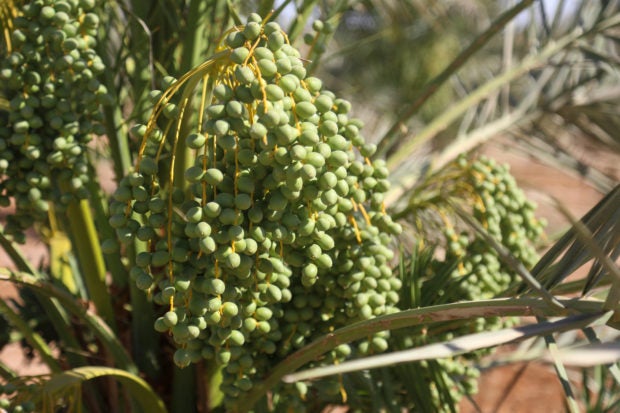 This picture shows a dates growing on a palm tree in Iraq’s central city of Karbala, on May 20, 2022. AFP

The fruit is the country’s second largest export commodity after oil, according to the World Bank.

“As global demand is increasing, the ongoing initiatives in Iraq on improving quality should be continued,” a recent World Bank report stated.

While exports earn the national economy $120 million annually, the organisation laments that much of Iraq’s crop is sold to the United Arab Emirates, where dates are repackaged and re-exported for higher prices.

In the town of Badra, on Iraq’s eastern border with Iran, grievances are commonplace.

The scars of war are evident among groves of decapitated palm trees.

For more than a decade, officials have complained of scarce water supplies, and have accused Iran of upstream diversions of the Mirzabad River, known locally as Al-Kalal.

“The date of Badra is incomparable,” says Mussa Mohsen who owns around 800 date palm trees.

“Before, we had water from Al-Kalal which came from Iran,” he recalls.

“Badra was like a sea but now to irrigate we rely on wells.”