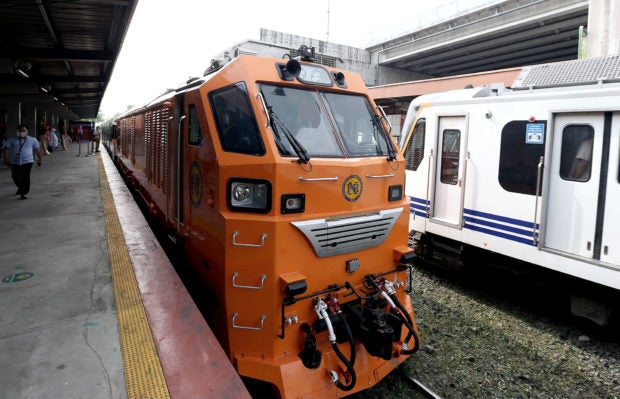 UPGRADES ON TRACK The refleeting program of the Philippine National Railways (PNR) gets a boost with the acquisition of three diesel hydraulic locomotives and 15 passenger coaches from Indonesian manufacturer PT Inka. It arrives at De la Rosa Station in Makati City, next to another PT Inka train (painted white), which was shipped in 2019. —RICHARD A. REYES

MANILA, Philippines — In a bid to modernize the country’s rail transport, President Ferdinand “Bongbong” Marcos Jr. has directed the Department of Transportation (DOTr) to go back to the negotiating table to secure the loan agreements for three big-ticket railway projects after China failed to act on the country’s funding request, Transportation Undersecretary Cesar Chavez said on Saturday.

Chavez, in a statement, said Marcos was referring to the Subic-Clark Railway Project, the Philippine National Railways (PNR) South Long-Haul Project and the Davao-Digos segment of the Mindanao Railway Project (MRP).

The three said projects were to be funded under China’s official development assistance (ODA) through loan agreements between the governments of the Republic of the Philippines and the People’s Republic of China.

But the loan agreements on the said projects are now considered “withdrawn” after the Chinese government failed to act on the funding requests by the former Duterte administration, according to Chavez.

“There was a policy discussion on three China ODA rail projects in last Tuesday’s cabinet meeting which the President commented that as a matter of policy, we should encourage more investments in rail and that we should focus more on rail transport,” Chavez said.

The contract for the construction of the P51-billion Subic-Clark Railway Project was awarded to China Harbour Engineering Co. in December 2020.

Meanwhile, the P83-billion Tagum-Davao-Digos segment of the MRP failed to proceed after China was unable to submit a shortlist of contractors for its design-build contract.

Chavez said the Department of Finance informed China Eximbank that the submitted loan applications would only be valid until May 31, 2022, and would be automatically withdrawn if not then approved.

Finance Secretary Carlos Dominguez III later decided to cancel the loan applications with China in the light of the upcoming transition of government and in deference to the incoming administration.