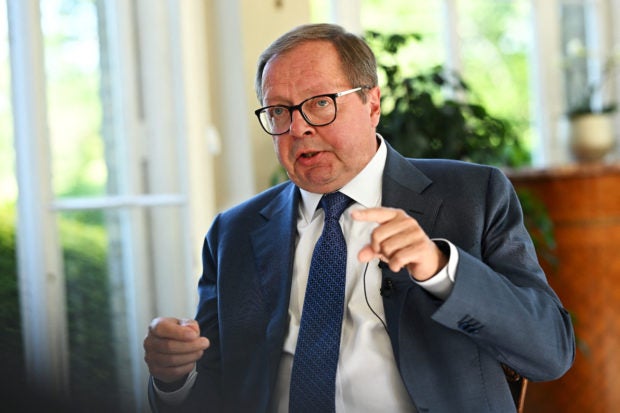 Russia’s Ambassador to Britain Andrei Kelin, speaks during an interview with Reuters at his official residence in London, Britain, July 7, 2022. REUTERS/Dylan Martinez

“I am shocked to hear reports of the death of British aid worker Paul Urey while in the custody of a Russian proxy in Ukraine. Russia must bear the full responsibility for this,” Foreign Secretary Liz Truss said.

His death was also confirmed by British charity Presidium Network, which described him as a humanitarian worker and denied he had any military background.

Urey, 45, was detained and charged with “mercenary activities” by separatists in the DPR, a breakaway entity that is recognized only by Russia, Syria and North Korea.

Read Next
‘Most wanted’ drug lord Rafael Caro Quintero arrested in Mexico — sources
EDITORS' PICK
Percy Lapid’s kin: ‘We demand that his cowardly assassins be brought to justice’
Nothing’s certain so here’s how everyday Filipinos can make the most out of their Plan B
Do all the things you do, faster
PNP vows to bring justice for slain Percy Lapid; says probe underway
House energy committee chair Arroyo bats for cheap electricity
‘Seniority’ requirement despite vacant posts in DOH bothers senators
MOST READ
Student stabs teacher dead in Samar town
Trixie Angeles quits as press secretary due to health reasons
Not rehired?: Trixie Angeles not on list of reappointed Cabinet execs
Final net satisfaction rating slightly decreases for Robredo, Sotto — SWS
Don't miss out on the latest news and information.