Biden to meet Palestinian leaders ahead of Saudi visit 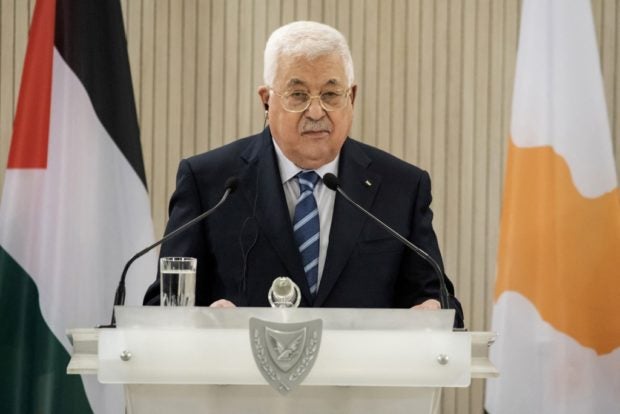 Jerusalem — US President Joe Biden will meet Palestinian leader Mahmud Abbas in the occupied West Bank on Friday, with talks expected to focus on economic measures but without striking any major diplomatic breakthrough.

Bethlehem marks the latest stop on Biden’s Middle East tour, following meetings with Israeli officials and ahead of a visit to Saudi Arabia.

With Israeli-Palestinian peace negotiations moribund since 2014, a US official said the delegation would make “some significant announcements… such as enhancing Palestinian economic opportunities.”

Biden would announce an “additional $201 million” for the UN Relief and Works Agency for Palestinian Refugees (UNRWA), which provides education, health care and other services to Palestinians, a senior administration official said on Friday.

“The president has restored funding for UNRWA, which the previous administration had cut entirely, and under President Biden the US is now UNRWA’s largest donor,” the senior official said.

The US delegation will also unveil plans to roll out infrastructure for 4G internet across the Gaza Strip and West Bank by the end of next year, fulfilling a longstanding aspiration among Palestinians as some of their Israeli neighbors already tap in to faster 5G networks.

Biden would also unveil a “significant funding package” for hospitals in Israeli-annexed east Jerusalem, which largely support the Palestinian population, the US official said earlier.

The US president is due to visit one of those hospitals ahead of his meeting with Abbas, without being accompanied by Israeli officials.

But Biden made clear on Thursday he had no plans to reverse the controversial move to recognize Jerusalem as Israel’s capital by his predecessor Donald Trump, which infuriated Palestinians who see its eastern sector as the seat of their future state.

With Palestinians banned by Israel from political activity in Jerusalem, the US president will travel to Bethlehem to meet Abbas.

A muted welcome awaited him from Palestinians there.

On Thursday evening, protesters in Ramallah burned pictures of Biden.

“I am against President Abbas meeting him, because we should make it clear that we will not sit with anyone who is the enemy -– Biden clearly said ‘I am a Zionist’,” Jamilla Abbed, a retiree told AFP, predicting: “We’ll just get the crumbs.”

The Palestinian president has been in office since 2005 and last year scrapped elections, blaming Israeli officials for allegedly refusing to guarantee voting in east Jerusalem.

Biden on Thursday reiterated Washington’s support for “a two-state solution for two people, both of whom have deep and ancient roots in this land, living side by side in peace and security.”

While Israeli Prime Minister Yair Lapid said he ultimately backs a two-state solution, the caretaker leader is not expected to take any steps towards a peace agreement ahead of an election in November.

The Israeli government has recently adopted an approach known as “shrinking the conflict,” taking economic measures such as increasing the number of permits for Palestinians to work in Israel.

The World Bank put the poverty rate in the Palestinian territories at 27 percent last year, saying in April that the outlook “remains precarious and subject to additional political and security risks.”

Finding a lasting solution to the decades-long conflict was, however, not the top priority during Biden’s meeting in Jerusalem with Lapid.

Iran’s nuclear programme and its support for Islamist groups such as Hamas, which rules Gaza, was the focal point of Thursday’s talks. 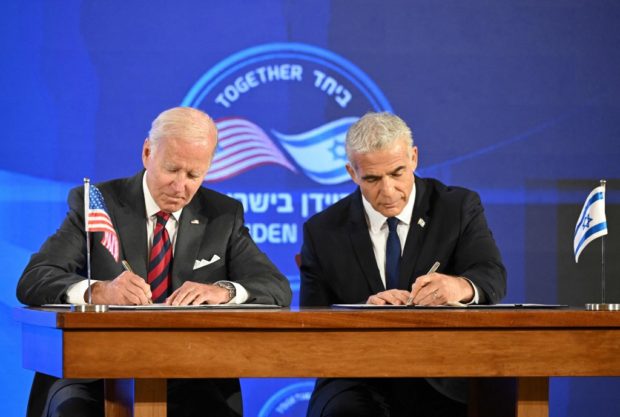 Biden and Lapid signed a new security pact, in which Washington committed to using all its “national power” to ensure Tehran does not obtain a nuclear weapon.

Washington is currently trying to get the nuclear deal between Tehran and world powers back on track, after it was derailed by Trump’s withdrawal of US support in 2018.

Following the visit to the West Bank, Biden will fly from Israel to Iran’s regional rival Saudi Arabia.

It will be the first publicly acknowledged direct flight from Tel Aviv to the Gulf kingdom, which does not recognize Israel.

In an apparent gesture of openness to the Jewish state ahead of Biden’s arrival, Saudi Arabia announced early Friday it was lifting restrictions on “all carriers” using its airspace.

Biden called that “an important step towards building a more integrated and stable Middle East region.”

Riyadh’s move effectively suspends overflight restrictions on aircraft travelling to and from Israel.

Saudi Arabia has long stressed its commitment to the decades-old Arab League position of not establishing official ties with Israel until the conflict with the Palestinians is resolved.

The US president is expected to meet Arab leaders from the Gulf Cooperation Council, who are gathering in the Saudi city of Jeddah, to discuss volatile oil prices.

Biden heads to Middle East for first tour as president