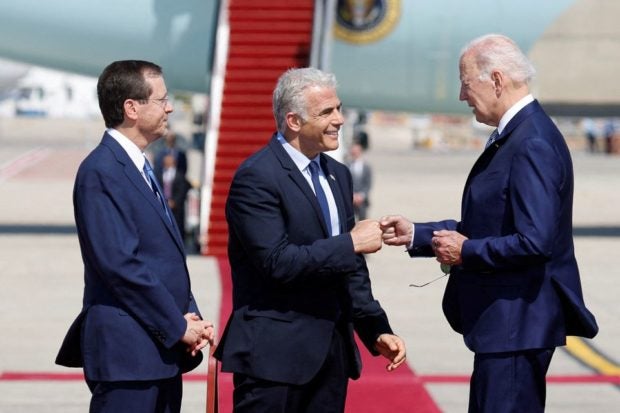 JERUSALEM — Israel embraced U.S. President Joe Biden as an old friend on Wednesday at the start of a high-stakes visit dominated by efforts to bring Israel closer to Saudi Arabia and persuade Washington’s Gulf allies to pump more oil.

Landing at Ben Gurion Airport, whose runway he first trod in 1973 as a senator, Biden bumped fists with Israeli Prime Minister Yair Lapid and, in a speech, described the connection between the two nations as “bone-deep”.

“You do not need to be a Jew to be a Zionist,” Biden added, voicing support for the ideology behind Israel’s foundation on lands with ancient Jewish roots, and which is deeply resented by many Palestinians.

Biden also reiterated a U.S. desire for negotiations, stalled since 2014, for Palestinian independence in Israeli-occupied territory, calling this two-state solution “the best hope”.

After separate meetings with leaders of both sides, Biden will on Friday fly on to Saudi Arabia, where he will attend a summit of Gulf allies. Under pressure at home to bring down soaring gasoline prices that have damaged his approval ratings, he is expected to press for expanded oil production.

Biden’s first trip as president to Israel – which, in a TV interview, he described as “kind of like going home” – is his 10th of a long political career. Biden entered the White House 18 months ago.

In a welcoming speech, Lapid called Biden “one of the best friends Israel has ever known”. But Israel and the United States have at times been divided over Iranian nuclear diplomacy and Palestinian statehood prospects. 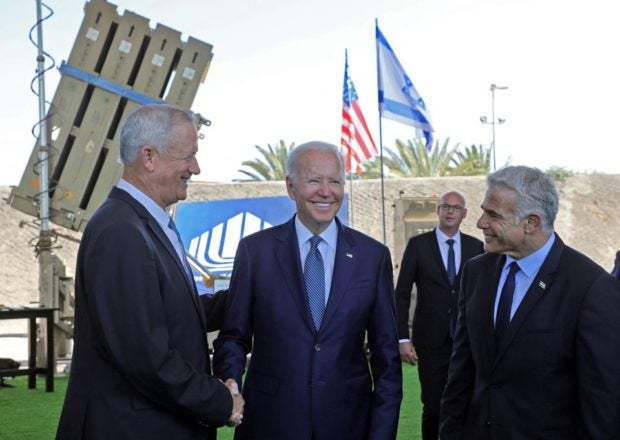 Forging Israel-Saudi relations is “going to take a long time”, Biden told Israel’s Channel 12 TV. “But increasing the relationship in terms of the acceptance of each others’ presence, the working together on certain things – it all makes sense to me.”

He added that enhancing Israelis’ integration in the region makes it “more likely there is going to be a means by which they can eventually come to an accommodation with the Palestinians”.

Wasel Abu Youssef, a member of the umbrella Palestine Liberation Organization (PLO), said he saw nothing new from Biden on Palestinian issues.

“Biden’s visit aims to integrate the occupation state in the Arab region and build a new alliance against Iran. When it comes to the promises President Biden made during his electoral campaign and early in office, we don’t see any practical formula to reflect that on the ground,” he added. 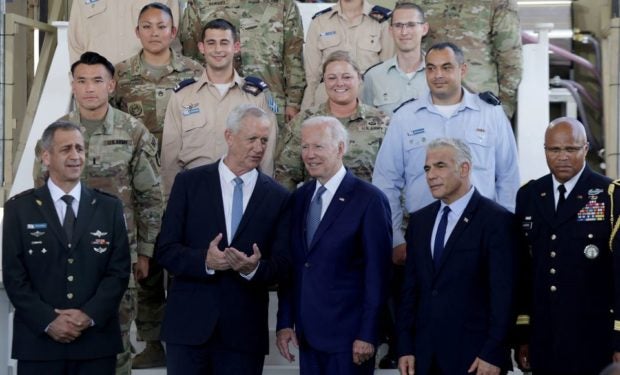 A centerpiece of Biden’s visit will be talks in Jeddah with Saudi leaders including Crown Prince Mohammed bin Salman, accused by the U.S. intelligence community of being behind the 2018 murder of Washington Post journalist Jamal Khashoggi.

The meeting is a reversal of Biden’s previous position of making Saudi Arabia a “pariah” over Khashoggi’s death. How the White House handles the optics of the meeting and whether photos will be released of it will be closely watched.

Aides say he will bring up human rights concerns while in Saudi Arabia, but he has nonetheless drawn fire from a wide array of critics.

“Biden needs the Saudis to increase their oil production to help keep global energy prices in check,” wrote Washington Post publisher Fred Ryan in an opinion piece. “The trip sends the message that the United States is willing to look the other way when its commercial interests are at stake.”

Tensions are high between Israel and the Palestinians over the killing of Palestinian-American journalist Shireen Abu Akleh in May during an Israeli army raid in the West Bank.

Palestinians say she was killed by Israeli troops deliberately; Israel denies this. Washington has concluded she was killed by a bullet from the direction of an Israeli position but it has no evidence it was intentional. 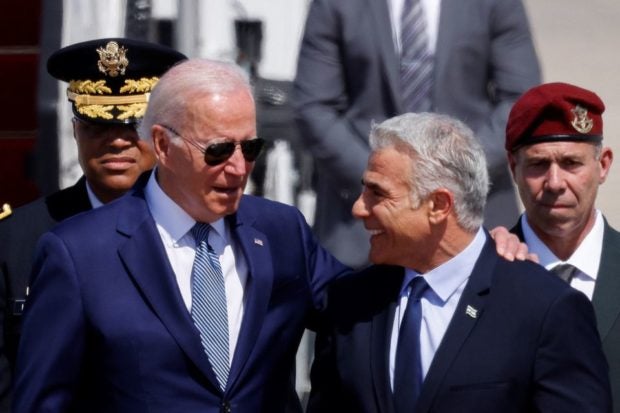 Her family had accused the Biden administration of providing impunity for Israel over her killing, and asked to meet Biden during his trip to the region this week. U.S. Secretary of State Anthony Blinken had spoken with the family, Sullivan said, and invited them to a meeting.

The Palestinians, while appreciating the resumption of ties under Biden, want the United States to remove the PLO from the U.S. list of terrorist organizations, block changes to rules for worship at Jerusalem sites revered by Muslims and Jews, and curb Jewish settlement expansion in the West Bank.

Israeli officials said Biden’s visit would work towards what they called a Jerusalem Declaration on the U.S.-Israel Strategic Partnership.

One official said the joint declaration “takes a very clear and united stand against Iran, its nuclear program and its aggression across the region and commits both countries to using all elements of their national power against the Iranian nuclear threat.”

Biden is likely to face questions from Israel and from Gulf states about the wisdom of his attempts to revive a nuclear deal with Iran that was abandoned by Trump.

Israel has been jolted by internal political strife with previous prime minister Naftali Bennett’s coalition collapsing in June. This has left Lapid as caretaker until a new election in November, the fifth in less than four years. He and Biden will give a joint news conference on Thursday.

Biden will also meet past prime minister Benjamin Netanyahu, now the opposition leader. Netanyahu was a close ally of Trump and a critic of the Obama administration when Biden served as vice president.

Biden heads to Middle East for first tour as president

Biden defends decision to visit Saudi Arabia, says rights are on his agenda

Biden to travel to Saudi Arabia, Israel next month—source