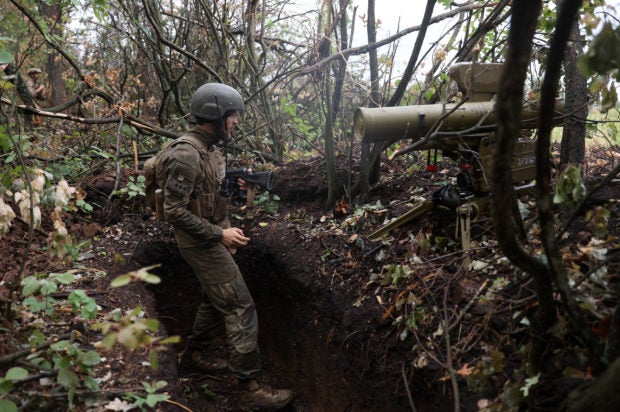 Ukrainian serviceman keeps his position on the front line in the south of Kharkiv region, on July 11, 2022, amid the Russian invasion of Ukraine. AFP

The death toll from a Russian missile strike which partially destroyed an apartment building in the town of Chasiv Yar on Sunday rises to 26, as Moscow’s forces seek to consolidate their control over the eastern Donbas region.

“26 dead people have been discovered and removed from the rubble” while nine people were recovered alive, the emergency services say in a statement on social media, adding that work is ongoing.

Having battled to capture areas of the eastern Lugansk region, Russian troops are now focussing on neighboring Donetsk as they look to take control of the whole industrial Donbas region.

Russian troops are believed to be planning to launch some of their heaviest attacks yet in the Donetsk region, the Ukrainian army warns.

“There are signs of enemy units preparing to intensify combat operations in the direction of Kramatorsk and Bakhmut,” it says, referring to two main cities still under Ukrainian control.

Russian energy giant Gazprom begins 10 days of maintenance on its Nord Stream 1 pipeline — with Germany and other European countries watching anxiously to see if the gas comes back on.

After the Nord Stream stop, Italian energy company Eni and Austrian Group OMV both report their supplies from Gazprom had also been reduced.

Dutch Prime Minister Mark Rutte says during a visit to Kyiv his country will supply Ukraine with more long-range artillery and an aid package worth 200 million euros ($201 million).

“This war may last longer than we all hoped or expected. But that does not mean we can sit back and passively watch how it unfolds. We have to stay focused and continue to support Ukraine in every way,” he tells a press conference with Ukrainian President Volodymyr Zelensky.

Vilnius has restricted the transit of goods sanctioned by the EU into Kaliningrad, a Russian region sandwiched between Nato members Lithuania and Poland, since mid-June. The move has infuriated Moscow, which says it is illegal.

Putin signs a decree to fast-track citizenship for all Ukrainians.

The move builds on previous orders — including one issued earlier in the invasion — making it easier for Ukrainians living in Moscow-occupied territory to receive Russian passports.