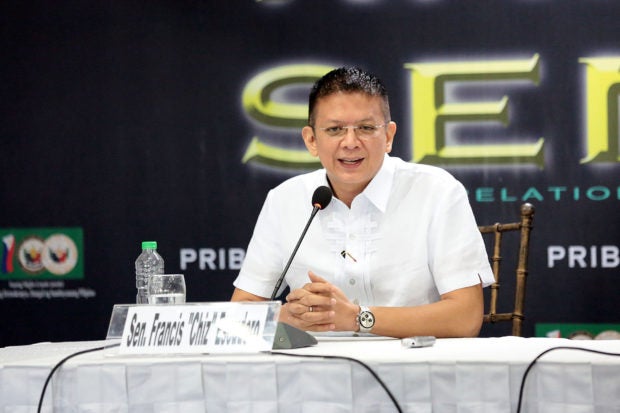 MANILA, Philippines—As some senators favor taxing single-use plastics and online purchases, Senator Francis “Chiz” Escudero would rather suggest that government go after “uncollected taxes lost to either corruption and/or inefficiency.”

The former head of the Senate committee on ways and means pegged these uncollected taxes at P200 billion.

“It’s always easier to go for imposing new, or increasing whatever existing, taxes in order to raise revenues for gov’t. However, this is burdensome and is not in keeping with the times (of slow economic growth, increased unemployment and rising inflation),” Escudero said in a text message to reporters on Monday.

“I think the first order of business for the new Finance Secretary is to plug loopholes, clean up and make collection of existing taxes and duties by the BIR and BOC,” the senator then said,  referring to the Bureau of Internal Revenue and Bureau of Customs.

“With nearly ₱200B in uncollected taxes lost to either corruption and/or inefficiency, this is by far more than any projected revenue of the new taxes he is mulling,” Escudero went on.

According to Finance Secretary Benjamin Diokno, taxing single-use plastics and online purchases are just among the revenue measures being considered by his office.

Some senators agreed with the idea.

“Goods and services bought through the internet should really be taxable for VAT (value added tax) as all goods and services are, unless expressly made exempt by law,” according to Senator Sonny Angara in a separate statement.

Angara, who is poised to keep the chairmanship of the Senate ways and means panel in the 19th Congress, said he also favors taxing plastics as it is also the practice in other countries.

“This is intended to incentivize or encourage the use of recyclable bags and materials, which is better for the environment,” he said.

Senator Grace Poe shared this sentiment on the single-use of plastics.

“The rampant use of single-use plastics is detrimental to our environment. Taxing them can discourage its use and even encourage the use of locally available materials for packaging. I have no problem with it,” she said in a separate text message.

But on taxing online purchases, Poe said she has yet to see the proposal first of the Department of Finance.

“We cannot discourage small businesses especially and add more burden to consumers by heavily taxing them while there is an unmitigated increase in fuel prices,” she stressed.

In the last Congress, Revilla sought  a Senate inquiry on the possibility of collecting taxes from “multinational online streaming services and the digital economy in general.”

Revilla bats for imposition of tax on digital content, services