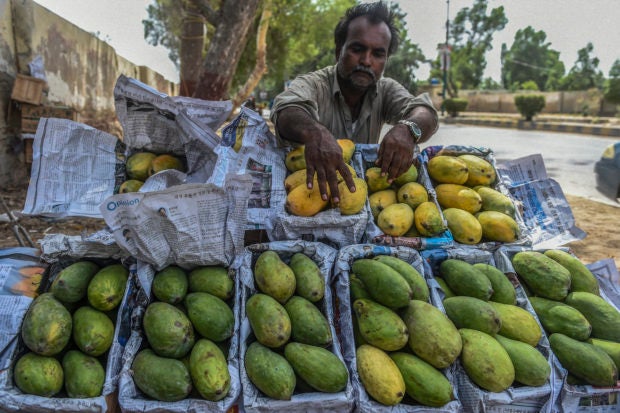 In this picture taken on June 15, 2022, a street vendor waits for customers while selling mangos in Mirpur Khas city in Pakistan’s southern Sindh province. – AFP

MIRPUR KHAS, Pakistan—Mango farmers in Pakistan say production of the prized fruit has fallen by up to 40 percent in some areas because of high temperatures and water shortages in a country identified as one of the most vulnerable to climate change.

The arrival of mango season in Pakistan is eagerly anticipated, with around two dozen varieties arriving through the hot, humid summers.

This year, however, temperatures rose sharply in March — months earlier than usual — followed by heatwaves that damaged crops and depleted water levels in canals farmers depend on for irrigation.

“Usually I pick 24 truckloads of mangoes… this year I have only got 12,” said Fazle Elahi, counting the bags lined up by his farm.

The country is among the world’s top exporters of mangoes, harvesting nearly two million tons annually across southern parts of Punjab and Sindh.

The total harvest is yet to be measured, but production is already short by at least 20 to 40 percent in most areas, according to Gohram Baloch, a senior official at the Sindh provincial government’s agriculture department. 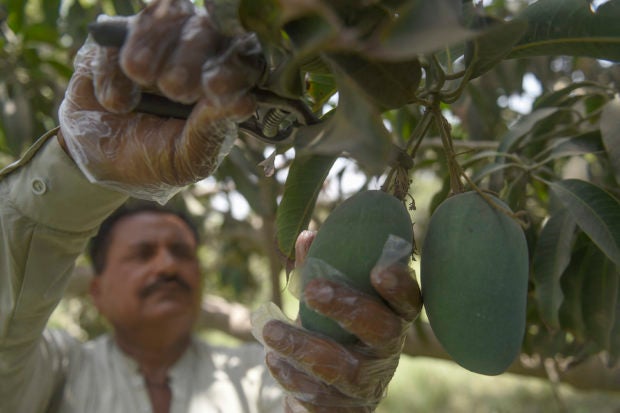 In this picture taken on June 15, 2022, Hari Mali, a farm worker plucks mangoes from a tree at a farm outside Mirpur Khas city in Pakistan’s southern Sindh province. AFP

Umar Bhugio, who owns swaths of orchards outside Mirpur Khas — locally known as the city of mangoes — said his crops received less than half the usual amount of water this year.

“Mango growers confronted two problems this year: one was the early rise in temperatures, and secondly the water shortage,” he said.

Pakistan is one of the most water-stressed countries in the world, a problem made worse by poor infrastructure and mismanagement of resources.

It also ranks as the country eighth most-vulnerable to extreme weather due to climate change, according to the Global Climate Risk Index compiled by environmental NGO Germanwatch. 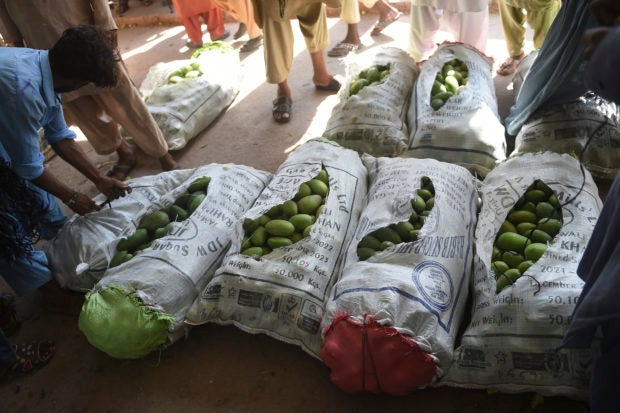 In this picture taken on June 14, 2022, a laborer sews sacks containing mangoes at a fruit market outside Mirpur Khas city in Pakistan’s southern Sindh province. AFP

A rise in temperature is generally expected in the mango belt in early May, which helps the fruit ripen before picking starts in June and July.

But the arrival of summer as early as March damaged the mango flowers, a key part of the reproductive cycle.

“The mango should weigh over 750 grams but this year we picked very undersized fruit,” Elahi said.

Known in South Asia as the “king of fruits”, the mango originated in the Indian subcontinent.

The country’s most treasured variety is the golden-yellow Sindhri, known for its rich flavour and juicy pulp.