Links between Trump associates, militants in focus at Jan. 6 hearings this week 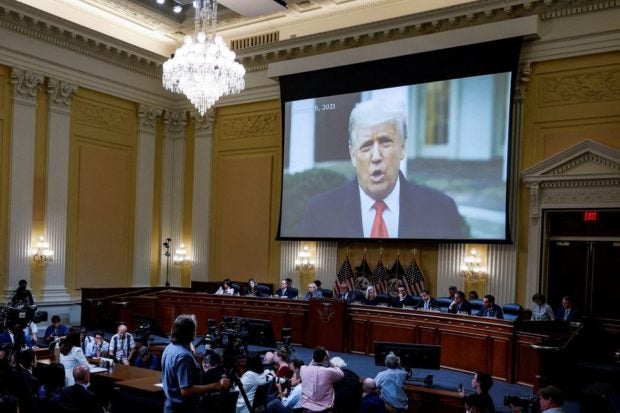 A video of former U.S. President Donald Trump is played as Cassidy Hutchinson, who was an aide to former White House Chief of Staff Mark Meadows during the Trump administration, testifies during a House Select Committee public hearing that investigates the January 6 Attack on the U.S. Capitol, at the Capitol, in Washington, U.S., June 28, 2022. Anna Moneymaker/Pool via REUTERS

WASHINGTON — Congressional investigators into the Jan. 6, 2021, attack on the U.S. Capitol expect this week to draw connections between militant groups that took part and government officials, possibly including then-President Donald Trump, a member of the committee conducting the investigation said on Sunday.

“We are going to be connecting the dots during these hearings between these groups and those who were trying in government circles to overturn the election,” Democratic Representative Zoe Lofgren said on CNN’s “State of the Union.”

Asked if Trump was aware members of these groups attended a rally he led outside the White House when he urged them to march on the Capitol, Lofgren said: “You have to reach your own conclusions but based on the events leading up to the day, I think that would be a logical conclusion.”

Trump, a Republican, has falsely claimed Democrat Joe Biden defeated him in the 2020 presidential election through massive fraud – assertions rejected in U.S. courts, by Trump’s own Justice Department and even Republican-led audits.

After Trump spoke outside the White House on Jan. 6, his supporters marched to the Capitol in a failed bid to prevent Congress from certifying Biden’s victory in a session where then-Vice President Mike Pence was presiding.

Two groups, the self-described Oath Keepers and Proud Boys, will be under the spotlight in the two hearings this week, expected on Tuesday and Thursday.

NBC News reported that Jason Van Tatenhove, a former spokesperson for the Oath Keepers, would testify on Tuesday. A committee spokesperson did not respond to a request for comment.

Federal prosecutors have alleged that Jeremy Brown, a member of the Oath Keepers, brought explosives to the Washington area on Jan. 6. Brown, in a statement, called the charges a “disgusting lie.”

During a September 2020 debate between Trump and Biden before the November election, Trump was asked whether he would condemn white supremacist and militia groups for violent activities during his presidency.

Trump responded, “Proud Boys, stand back and stand by.” He added, “Somebody’s got to do something about antifa and the left. … this is a left-wing problem.”

Videotaped excerpts of that testimony will be presented at Tuesday’s hearing, said Lofgren, who is one of nine members on a bipartisan House of Representatives Select Committee that began its current series of public hearings last month.

“He was able to provide information on basically all of the critical issues we are looking at, including the president’s what-I-would-call dereliction of duty on the day of Jan. 6,” Lofgren said.

The committee has yet to say whether this Thursday’s hearing, expected in evening prime time when U.S. television audiences are at their peak, will be the final one before a panel report is issued, possibly in September.

Representative Adam Kinzinger, one of two Republicans on the panel, is expected to lead witness questioning that night, along with Democratic Representative Elaine Luria.

“We’re going to really focus on what was the president doing from in essence the moment the insurrection started until he finally, hours later, put out a tweet that said, ‘We shouldn’t do anything like this,'” Kinzinger told ABC’s “This Week.”

He added, “Keep in mind in the middle of that was the tweet that said in essence this is what happens when you steal an election; that Vice President Pence deserved this.”

Lofgren also said the committee had received a letter from Trump adviser Steve Bannon saying he would be willing to testify. Bannon was charged last year with two counts of contempt of Congress for defying a committee subpoena.

US Capitol riot probe to kick off with prime-time hearing