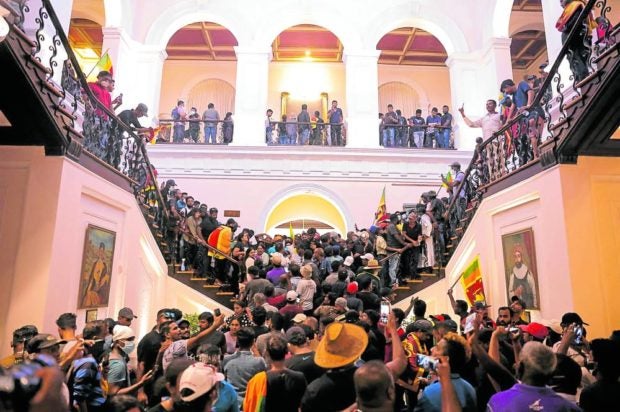 ‘WORK QUICKLY’ | After hundreds of Sri Lankans stormed the presidential palace on Saturday, forcing President Gotabaya Rajapaksa to flee and announce his resignation, the US Department of State called on a constitutionally selected government “to work quickly” to address public discontent over worsening economic conditions. (Reuters)

COLOMBO — Sri Lanka’s President Gotabaya Rajapaksa was preparing to finally give up power by Wednesday after he fled from protesters who stormed the presidential palace on Saturday, forcing him to announce his resignation.

The events on Saturday were the culmination of months of anti-government protests fueled by an unprecedented economic crisis that bankrupted the South Asian island nation and fury over the ruling Rajapaksa clan’s corruption.

Hundreds of thousands of people had massed in the capital, Colombo, on Saturday to demand the government take responsibility for crippling food and fuel shortages and for mismanaging the nation’s finances.

After seizing the presidential palace, the throng of protesters walked through its rooms, with many of them jumping into the compound’s pool.

Others were seen laughing and lounging in the stately bedrooms, as one pulled out what he claimed was a pair of Rajapaksa’s underwear.

After fleeing, Rajapaksa boarded a naval craft at the Colombo port and was taken to the island’s southern waters, where he said he would finally bow to demands for him to step down.

Parliamentary speaker Mahinda Abeywardana said in a televised statement: “To ensure a peaceful transition, the president said he will step down on July 13.”

Demonstrators had already maintained a protest camp outside Rajapaksa’s office for months.

The camp became the scene of clashes, and in May a gang of Rajapaksa loyalists attacked protesters gathered there.

Nine people were killed and hundreds were wounded after the violence sparked reprisals against pro-government mobs and arson attacks on the homes of lawmakers.

Earlier on Saturday, security forces attempted to disperse the huge crowds that had mobbed Colombo’s administrative district. Dozens were injured in the resulting clashes.

A spokesperson for Colombo’s main hospital said three people were being treated for gunshot wounds, along with 36 others suffering breathing difficulties after being caught up in tear gas barrages.

Meanwhile, people unable to travel to the capital held protests in other cities across the island.

Rajapaksa had to be extracted from his residence by troops who fired into the air to keep the crowd at bay.

Prime Minister Ranil Wickremesinghe, the first in line to succeed Rajapaksa, had called a meeting with political leaders and said he was willing to step down to pave the way for a unity government. 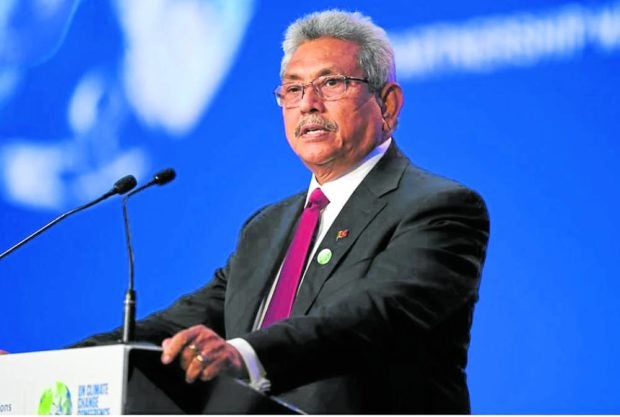 But this failed to placate protesters, who also stormed the premier’s private residence and set it on fire on Saturday night.

Footage shared on social media showed a crowd cheering the blaze, which broke out shortly after a security detachment guarding Wickremesinghe attacked several journalists outside his home.

A spokesperson of the Department of State said “the Sri Lankan parliament [must] approach this juncture with a commitment to the betterment of the nation—not any one political party.”

Rajapaksa’s departure is expected to trigger a power struggle.

“We urge this government or any new, constitutionally selected government to work quickly to identify and implement solutions that will achieve long-term economic stability and address the Sri Lankan people’s discontent over the worsening economic conditions, including power, food, and fuel shortages,” the state department also said, while Secretary of State Antony Blinken visited Thailand. 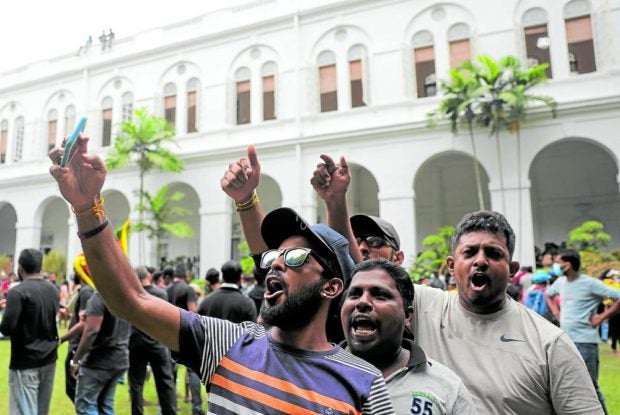 Rajapaksa has had a rocky relationship with Washington over his economic ties with Beijing and his dismissal of war crimes allegations in the bloody finale of his country’s decades-long civil war.

Sri Lanka has suffered through months of shortages of basic goods, fuel, lengthy blackouts, and galloping inflation after running out of foreign currency to import necessities.

The government has defaulted on its $51 billion external debt and is seeking an International Monetary Fund (IMF) bailout.

In a statement, the IMF said: “We hope for a resolution of the current situation that will allow for the resumption of our dialogue on an IMF-supported program.”

Both Washington and Beijing have offered to provide support to the once-prosperous island.

—AFP WITH A REPORT FROM REUTERS

Calm in Sri Lanka as president, premier to quit over economic collapse