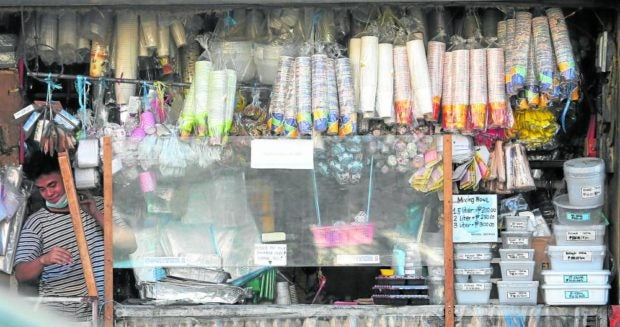 MANILA, Philippines — The government is determined to boost its revenues from the boom in digital or online transactions with an estimated yearly value-added tax (VAT) collection of as much as P13.2 billion from them and P1 billion more from single-use plastic products, which are a major pollutant, according to Finance Secretary Benjamin Diokno.

Aside from the fresh push for the two measures, the new administration is not planning any new or higher taxes in the short term, Diokno said during a press conference on Friday with other members of the economic team of President Ferdinand Marcos Jr.

“If you buy a product from a regular store, you pay tax; I think we should also pay tax on online sales,” he said, adding that it was only “fair” to levy the 12-percent VAT on such purchases.

This tax would be imposed “sooner than later” upon the passage of a bill to tax online providers of products and services, including video and audio streamers, shopping sites, and advertisers on social media.

The bill authored by Albay Rep. Joey Salceda was passed by the House of Representatives during the 18th Congress, and it can be reintroduced and then tackled by the Senate in the 19th Congress.

Once enacted, users of Netflix (for video) and Spotify (for audio), for instance, would be charged higher subscription fees.

Salceda, who was the House ways and means committee chair in the 18th Congress, pushed for the online tax bill to partially offset the billions of pesos in foregone revenues after the government slashed the tax rate for corporations to 25 percent and to 20 percent the tax rate for micro, small and medium enterprises under the Corporate Recovery and Tax Incentives for Enterprises (Create) Law.

These tax cuts were retroactively applied to corporate taxes which had been due since July 2020 supposedly to ease the pain inflicted by COVID-19 on businesses.

While awaiting the passage of Salceda’s proposed law, the Bureau of Internal Revenue (BIR) worked on a system to collect VAT from foreign digital service providers, including global giants like Amazon, Google, Netflix, and Spotify.

Under the bill, all digital service providers with customers in the Philippines, whether operating here or abroad, were subject to VAT.

The digital service providers abroad are to register online for VAT purposes, similar to what they do in other countries. At the same time, they would be responsible for assessing, collecting, as well as remitting the VAT on transactions on their online platforms.

At the height of the pandemic, the BIR reminded online sellers, many of whom experienced a business boom as the pandemic shuttered thousands of brick-and-mortar stores and restricted travel, to register as taxpayers. It invoked a 2013 regulation to register issued by then BIR Commissioner Kim Henares.

The BIR is also running after delinquent social media “influencers,” investigating hundreds of them who may already be earning millions of pesos through their vlogs on YouTube and Facebook but are not paying any income tax.

Diokno said that the plan to impose a tax on single-use plastics would not only increase revenue but also help in the fight against climate change.

A bill passed by the House in December last year will impose an excise of P20 per kilo of single-use plastic bags used in retail stores, shops, supermarkets, and malls, among other sales outlets.

The excise will raise additional revenue of P1 billion yearly, according to the Department of Finance (DOF).

The World Bank said that plastics production contributed $2.3 billion to the Philippine economy in 2018, as many poor and middle-income households used cheap consumer goods in plastic containers.

“A high dependence on single-use plastics like multilayer sachets and pouches has led the Philippines to become a ‘sachet economy’ that continues to worsen the alarming levels of marine plastic pollution in the region,” the World Bank had said. About 163 million sachets are consumed in the country per day, it added.

In a June 21 report titled “Marine Plastic Management: The Gender Dimensions,” the World Bank said that an estimated 55 percent to 60 percent of global plastic waste leakage comes from China, Indonesia, the Philippines, Thailand, and Vietnam.

The Philippines has an estimated annual household plastic packaging consumption of 1,281,000 tons, or a per capita rate of 12.4 kilograms, according to the World Bank.

It said plastics were the fifth-largest import of the Philippines and in March 2019, it was worth $235.04 million, or 14.2 percent more than in the previous year. The country’s total plastic production in 2019 was estimated at 2,592,000 tons, the World Bank said.

Diokno said the Marcos administration was not looking at new or higher taxes on consumption, plus the three-year deferral of the scheduled personal income tax cuts while slashing public spending on nonpriority budget items.

These plans left behind by President Rodrigo Duterte’s economic team were aimed at repaying the pandemic-induced debts and reverting the yawning budget deficit to prepandemic levels.

Instead, Diokno said, they will focus on improving tax administration.

He acknowledged that they inherited a “much-better” tax system from the Duterte administration.

But the new administration also was handed a huge outstanding debt amounting to P12.5 trillion as of May. This is estimated to reach P13.4 trillion by year-end.

The loans were obtained to beef up the country’s COVID-19 war chest. Although these were concessional loans, the repayment will take two generations, or up to 2060.Diokno said the government wanted more inclusive growth in the next six years so it could collect more taxes. The Marcos administration targets a gross domestic product growth of 6.5 percent to 7.5 percent this year, and 6.5 percent to 8 percent yearly from 2023 to 2028.

He noted that the ongoing digitalization at the biggest tax-collection agencies—the Bureau of Customs and BIR—will hike their tax take and also result in “less opportunity for corruption.”

The finance chief said their plan is to raise the share of tax collected to the economy by 0.3 percent to 0.4 percent yearly through good tax administration and economic growth.

“That’s why we’re focusing on making sure that growth will be faster and more broad-based, [as] that’s where the bigger part of the tax revenues will come from,” Diokno said.