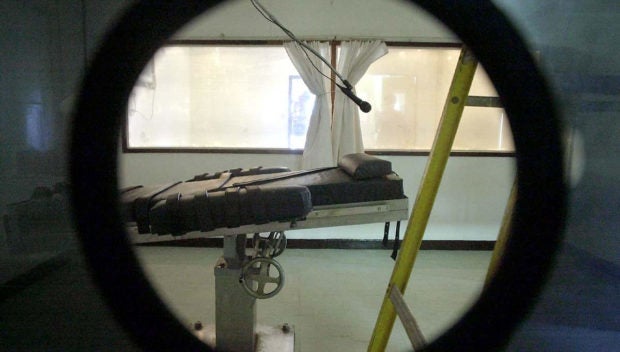 FILE PHOTO: View from inside the lethal injection chamber at the National Penitentiary in Manila. (AFP)

MANILA, Philippines—It was a comedy of errors seemingly inappropriate for a somber occasion on June 25, 1999 at the National Penitentiary—convicted child rapist Eduardo Agbayani was about to be executed by lethal injection when the sisters of his victim, his own daughter, made a last minute plea to save their father’s life through a Church official close to then President Joseph Estrada.

Bishop Teodoro Bacani, then spiritual adviser of Estrada, relayed the plea to the then President, who said he was granting the urgent request.

According to accounts of what happened next, Estrada made a call to the National Penitentiary to try to stop Agbayani’s execution some five minutes before those in charge pressed the buttons that would release killer chemicals into the convict’s veins and snuff his life out in the most silent of ways in a matter of seconds.

“The President said he would stop it,” Bacani had been quoted then as saying in an Associated Press report. “We were very happy.”

But the joyful mood would turn out to be premature.

Estrada’s call to the penitentiary didn’t make it through and all that the then President heard on the other line was either a busy signal or a fax tone.

According to one account cited in the website FilipiKnow, it was later discovered that Estrada had dialed the wrong number for the penitentiary’s death chamber which had a dedicated line installed only for the President if he would call and order a stay in execution.

Estrada, perhaps realizing that he was calling the wrong number, was able to finally connect to the death chamber at 3:12 p.m., one minute after his executioners released killer chemicals into Agbayani’s veins killing him almost instantaneously, according to accounts of that day.

“I’m sorry,” Estrada would tell Bacani. “We were too late.”

Years later, Estrada would be thankful he was spared from the same excruciating moments as Agbayani went through because the penalty of death, which he enthusiastically enforced in the cases of six convicts during his short-lived turn at the seat of power, had already been set aside by the time he was convicted of plunder, one of the heinous crimes that had been listed as punishable by death through lethal injection.

Agbayani became the second Filipino to suffer the penalty of death following the execution of another child rapist, Leo Echegarray, who had been executed on Feb. 5, 1999 just three months before Agbayani’s execution, after death penalty was first enforced since it was restored in 1993 through a law amending the Revised Penal Code. 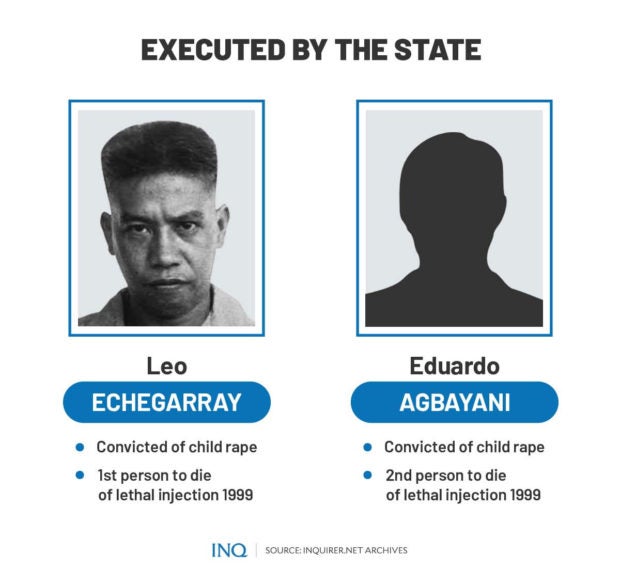 Echegarray had been convicted and sentenced to death in 1995 by Quezon City Judge Maximiano Asuncion, a member of the so-called Guillotine Club of judges, who died of a heart attack just two years before Echegarray was executed.

Although comical, the case of Agbayani and a President’s fumble were no laughing matters for anti-capital punishment advocates. It showed why the death penalty has the kind of finality that cannot be gambled on flimsy errors like dialing the wrong number, much less on major shortcomings like a corrupt justice system. Death, to those opposing cruel punishments for crimes, is a permanent thing that can’t be undone by correcting an erroneous judicial decision, much less by a fumbling President finally getting the correct number to call.

In other words, there’s no “Oops, I’m sorry” moment in death penalty.

Before Estrada was ousted in a civilian uprising spurred by massive and brazen corruption under him, the once popular actor who played roles as folk heroes defiant of laws, had been fiercely vocal about his conviction that death penalty was the right solution to criminality. “They deserve to die,” he once said of dozens of death row inmates at the National Penitentiary, now New Bilibid Prison, awaiting their execution dates.

Some 15 years after Estrada’s downfall and replacement by economist Gloria Macapagal Arroyo, the proposition that death penalty is the miracle drug that would cure criminality continues to ring perhaps louder than it did during Estrada’s short stint as President.

In Davao City on June 27, 2016, just weeks after winning the presidential elections, Rodrigo Duterte was in his turf in Davao City, explaining why he was in favor of death penalty. “I believe in retribution. Why? You should pay. When you kill someone, rape, you should die!” he said at a gathering in the city which he ruled for more than 20 years with an iron fist.

In July 2017, a year after rising to power as the Philippines’ 16th President, Duterte was on the podium before a joint session of Congress delivering his second State of the Nation Address (Sona) with one message that echoed throughout his campaign for the presidency in 2016—death to criminals.

“In the Philippines, it’s really an eye for an eye, a tooth for a tooth,” Duterte said at his second Sona, borrowing lines from the Old Testament. “You took a life, then you must pay for it with life,” he said. Listening to his argument would unlock gems of philosophy from India’s greatest leader, Mahatma Gandhi, who once said “an eye for an eye makes the world blind.”

But Duterte has his own basis for a strong push for death penalty. In his second Sona, he said criminals are beyond reform, although he didn’t cite where his information came from.

“You can’t place premium on the human mind, that you will go straight,” Duterte said. “Nobody can.” 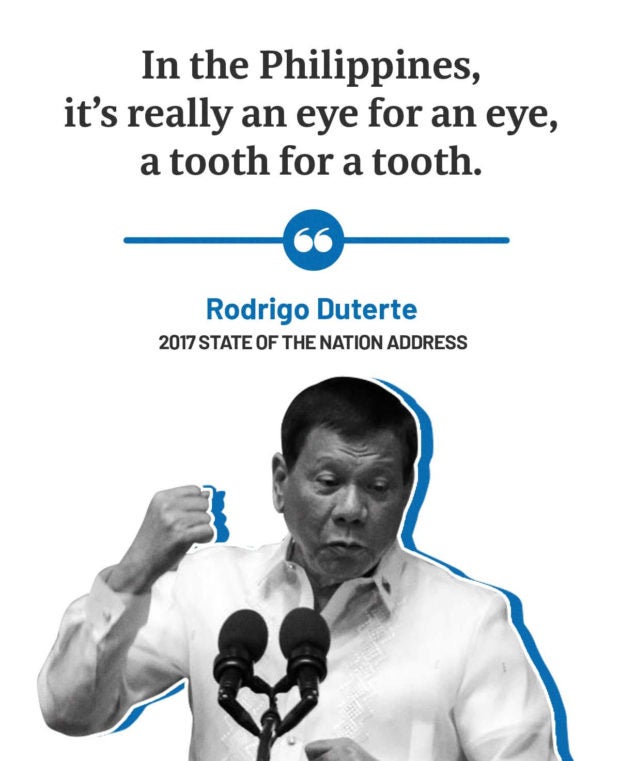 He said leniency toward criminals would simply lead to more crimes. “You are soon to be lenient about this son of a bitch, a human being that has a virulent brain and his enemy is society,” Duterte added, based on a report from Inquirer.net.

The recurring theme of death to criminals also announced its presence in Duterte’s Sona on July 22, 2019. In his speech, Duterte “respectfully” asked Congress to pass a law restoring the death penalty for drug crimes and plunder.

The connection between drugs and corruption has now been put forward by Duterte, which he had not done so in his previous Sona. “Let the reason why I advocate the imposition of the death penalty for crimes related to illegal drugs, the drugs will not be crushed unless we continue to eliminate corruption that allows this social monster to survive,” Duterte said.

To add shock value to his plea for the restoration of death penalty, Duterte said the attempt by homegrown affiliates of Islamic State (IS) to establish an IS caliphate in Marawi City was actually drug-related.

“During that Marawi siege, tons and tons of shabu, worth millions and millions of pesos, drug money, killed 175 and wounded 2,001 of my soldiers and policemen in that five-month battle,” the President said in his fourth Sona.

A close look at Duterte’s passionate, and often fierce, plea for the death penalty, however, would reveal a key element missing—how it would be effective in deterring crimes other than to scare the wits out of people.

Advocates opposing the return of capital punishment are more well-prepared in this area.

According to the website of the John J. Carroll Institute on Church and Social Issues (JJCICSI) based at the Ateneo de Manila University, numbers are the best arguments against the restoration of death penalty.

In 1992, JJCICSI cited data from the Philippine Statistics Authority (PSA) showing that prior to the restoration of death penalty in 1993, crime rate in the Philippines had been on the decline. The rate of decline in crimes, however, “appears to have slowed down” in the years when the death penalty was enforced.

In a presentation on its website, JJCICSI said the more effective deterrent to crime was the certainty of getting caught than imposition of heavier punishments, citing a 2010 study in the United States. In the Philippines’ National Capital Region, where Metro Manila is, the Ateneo-based institute said a study in 2016 showed that crimes increased alongside a decrease in crime solution.

It also cited a 2004 study to try to explain the driving forces behind crimes. The study, according to JJCICSI, showed that the more stable the economy, the fewer the crimes and the rate of murders and homicides decrease as the economy improves in urban and rural areas leading to higher incomes, lower prices and better education.

Whether an eye for an eye would bring a sense of justice to victims’ loved ones, the institute cited a 2007 study in the United States that showed only 2.5 percent of victims’ relatives found closure after the men or women who killed their loved ones had been executed.

Bringing the issue closer to home, JJCICSI said in 2004 the Philippine Supreme Court ruled in a decision that out of 907 convictions between 1993 and 2004 that the high court reviewed, nearly 72 percent, or 651 convicts, were wrongly judged.

On the economic backgrounds of those who had been sentenced to die, the JJCICSI cited a survey by the Free Legal Assistance Group (FLAG) in 2004 that found death row inmates to be “largely uneducated, underemployed and generally living in poverty.” 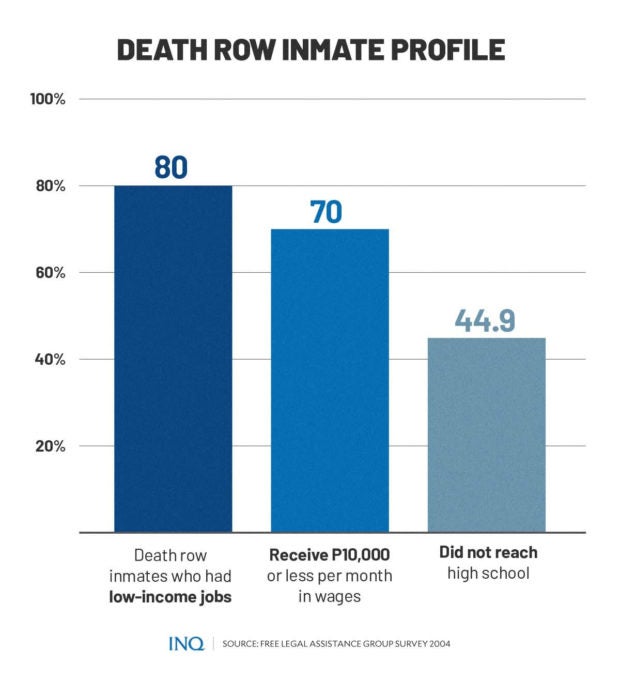 The FLAG survey results showed that more than 80 percent of death row convicts worked in low-income jobs as transport, construction or agricultural workers prior to their arrests. More than 70 percent said they earned less than P10,000 a month at the time of their arrest. Nearly half, or 44.9 percent, did not reach high school.

In China, where the execution rate for drug crimes between 2007 and 2011 was at least 510 convicts per year, the China National Narcotics Control Commission was unsure if the death penalty was a deterrent to drug-related crimes, according to the JJCICSI website. The average increase in drug crimes in China from 2007 to 2011 was 31,350 cases per year. In 2006 there were at least 14 million drug users in China.

In Iran, which also enforces the death penalty, the average execution rate for drug crimes was 449 per year but drug-related crimes continued to rise by more than 100 percent between 2006 and 2011.

It said one “telling statistic” about the restoration of death penalty through RA No. 7659 was the error rate in death sentences. A review of 907 capital punishment cases from 1993 to 2004, according to the Inquirer.net report, led to the revision of penalty for 555 cases, acquittal for 65 cases and dismissal for 26.

Echoing studies cited in the JJCICSI report, the Inquirer.net report said economic factors had also been “determinants of crime.”

“A comparison of crime rate, poverty incidence and gini coefficient—a measure of income inequality within a population—showed a direct relationship between poverty and crime rate,” the Inquirer.net 2017 report said.

It said three regions considered to be among the poorest in the Philippines—Central Visayas, Northern Mindanao and Bicol—were also the ones with the most crimes. The three regions also happened to be those with higher income inequality and along with it, higher crime rates.

(Note: This report was first published by INQUIRER.net in July 2019. As the debate on death penalty resumes in Congress, we are reposting this report to help policy makers reach an informed decision on whether to revive capital punishment)