Bye bye Boris: UK PM Johnson bows out with regrets but no apologies 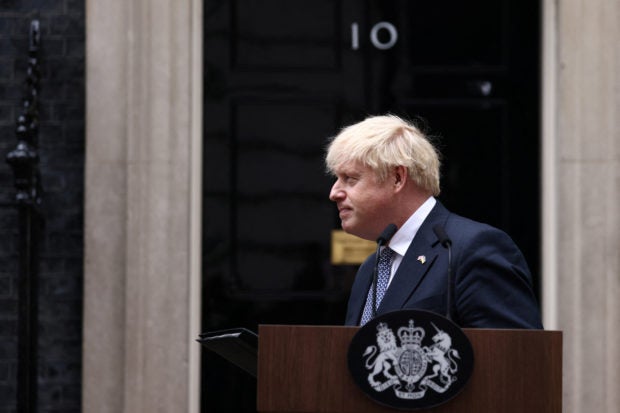 LONDON  – Boris Johnson emerged to cheers from loyal lawmakers, his staff and wife but any sign of support from allies arranged around him for his resignation speech was soon drowned out by loud boos from outside the gates of his Downing Street office.

After he started speaking, protester Steve Bray turned up his soundsystem to start playing “Bye Bye Boris” to the tune of “Bye Bye Baby” by the Bay City Rollers.

Other demonstrators booed and jeered, making it difficult for those amassed opposite the black door of Number 10 Downing Street to hear Johnson’s words.

The contrasting receptions typified much of Johnson’s divisive tenure as prime minister which started with the biggest Conservative vote share since 1979 but became mired in scandal.

In his party as well as on the street, the growing clamour for him to step down eclipsed the encouragement from those who stuck with him until the end, and was too noisy for him to ignore. His speech, however, offered no apology or contrition.

“I’ve tried to persuade my colleagues that it would be eccentric to change governments when we’re delivering so much and when we have such a vast mandate,” Johnson said.

“I regret not to have been successful in those arguments, and of course, it’s painful not to be able to see through so many ideas and projects myself.”

Johnson showed little emotion as he spoke, instead highlighting successes on a series of themes he often cites, such as delivering Brexit and rolling out COVID-19 vaccines.

He did not apologise for the scandals that eventually ended his premiership, from revelations of boozy partying in his office during COVID-19 lockdowns and the handling of sexual abuse complaints in the party.

To disgruntled lawmakers in his own party, already angry that he intends to stay on until a successor is selected rather than promptly handing over to a caretaker, the lack of contrition rubbed salt in the wound. [L8N2YO2IK]

“It was a short and bizarre resignation speech which didn’t mention the word resign or resignation once. There was no apology, no contrition,” Andrew Bridgen, a Conservative lawmaker and Johnson critic, told Reuters.

“There was no apology for the crisis his actions have put our government, our democracy, through.”

While many have cited Johnson’s lack of integrity and honesty as a key reason for turning against him, he gave a different explanation for why so many of his own lawmakers – including over 50 members of his government – revolted.

“As we’ve seen, a Westminster of a herd instinct is powerful; when the herd moves, it moves,” Johnson said.

“My friends, in politics no one is remotely indispensable.”