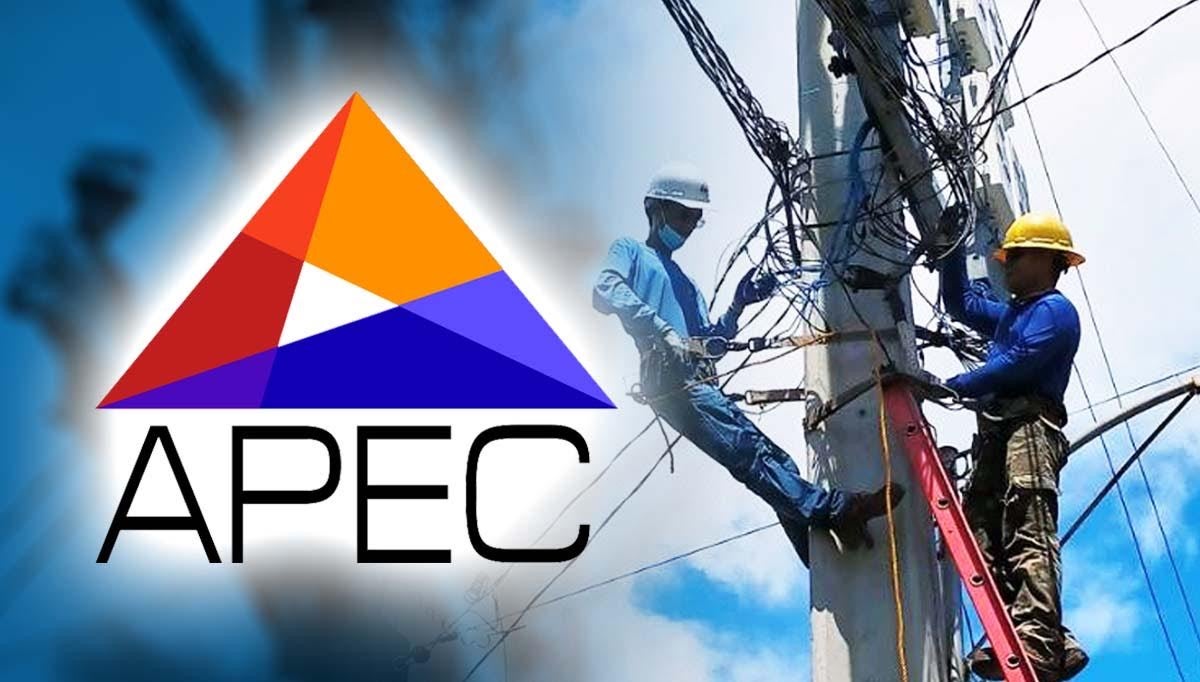 MANILA, Philippines—In February, ahead of the national and local elections, President Ferdinand “Bongbong” Marcos Jr.—who was then a presidential candidate—vowed to address the power supply woes in the Bicol Region.

In a statement, Marcos said he “feels the intolerable hardship that the Bicolanos are experiencing because of the endless brownout, which had been prevalent in the region for almost a decade.”

“This has a huge effect on the daily life of the citizens. They are no longer comfortable in their homes and offices, for sure many appliances were also damaged due to the endless brownout in Bicolandia,” he said in Filipino.

Strong typhoons, which has hit the region several times in the past years, were likewise found to aggravate the region’s power issues.

Six months into 2022, provinces in the region still suffer from power outages—whether scheduled or not—as lawmakers and distribution utilities find ways to solve the problem whilst bringing down electricity rates.

In the province of Albay, one of the biggest and longstanding issues suffered by residents is power outages, which happen almost every day within the past months—most of which last for hours.

This month alone, private power distributor Albay Power and Energy Corp. (APEC) posted at least 11 advisories on power interruptions affecting areas that are covered by substations across the province. 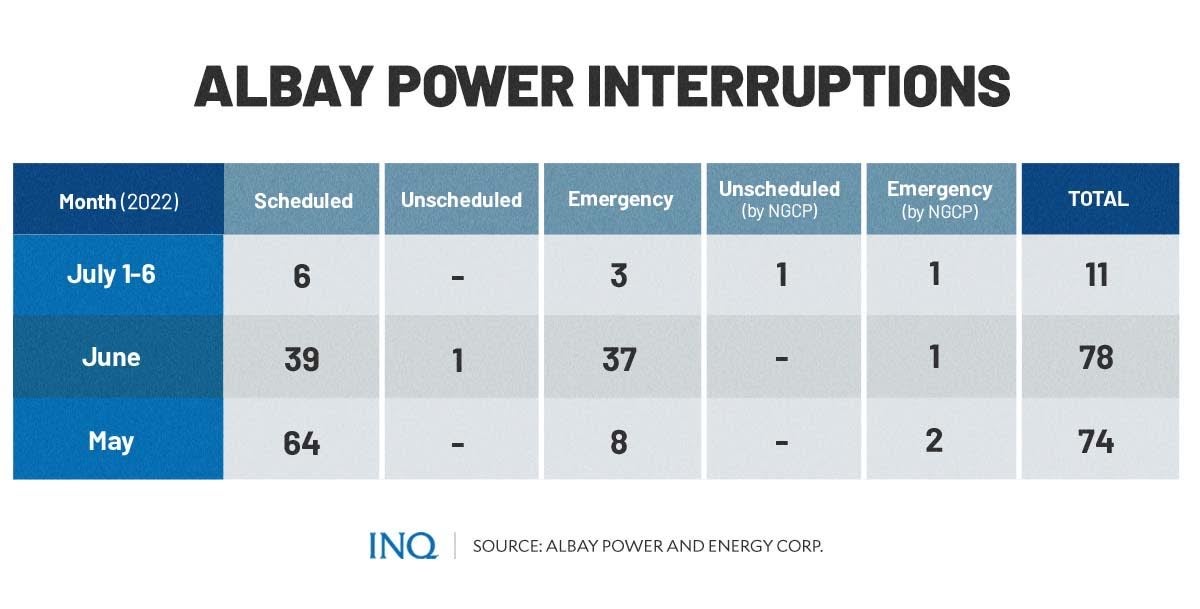 Among the common reasons cited for the power interruptions in the province were line clearing activities, hotspot corrections, repair of primary lines, pole replacements, and reconnection of cut-off primary risers.

While some power interruptions lasted for 15 minutes to 30 minutes, many lasted for hours—with some scheduled from 8 AM to 5 PM or 6 AM to 6 PM. 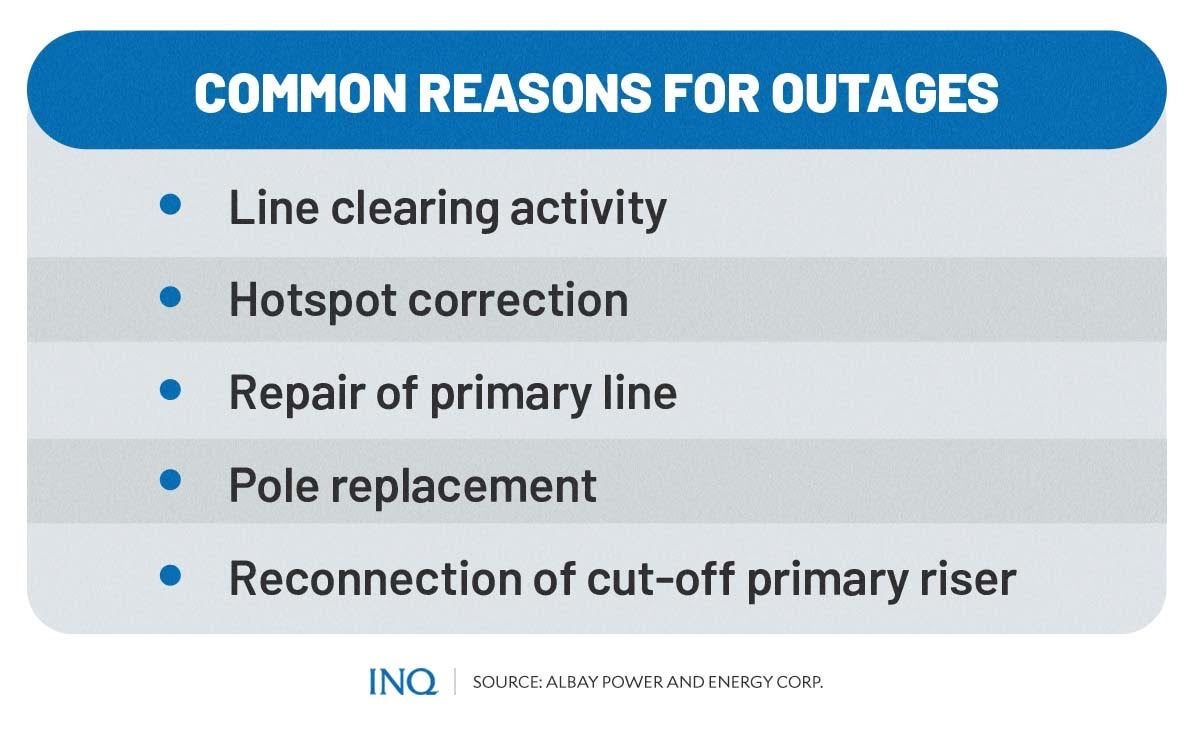 Aside from repairs and replacements of damaged lines and overloaded or busted transformers, in May, APEC made the decision to ask the National Power Corporation (NPC) in Bicol to cut off power services in the island town of Rapu-Rapu due to unpaid bills.

An article citing Lesley Capus, APEC  Institutional Relations and Customer Support Department head, said the firm requested the NPC-Bicol to cut off power services in the island town due to the unpaid outstanding debts of some subscribers despite repeated calls to settle their accounts.

According to Capus, out of the 1,700 delinquent customers in the island town, 658 were able to raise P3 million during APEC’s four-day pitch-in collection period.

The amount accounted for only 2 percent of the debt consumers owe APEC.

Capus also said APEC needed to proceed with the disconnection of power supply in Rapu-Rapu as the firm “can no longer sustain” paying P2 million every month for the electricity consumed by its customers. 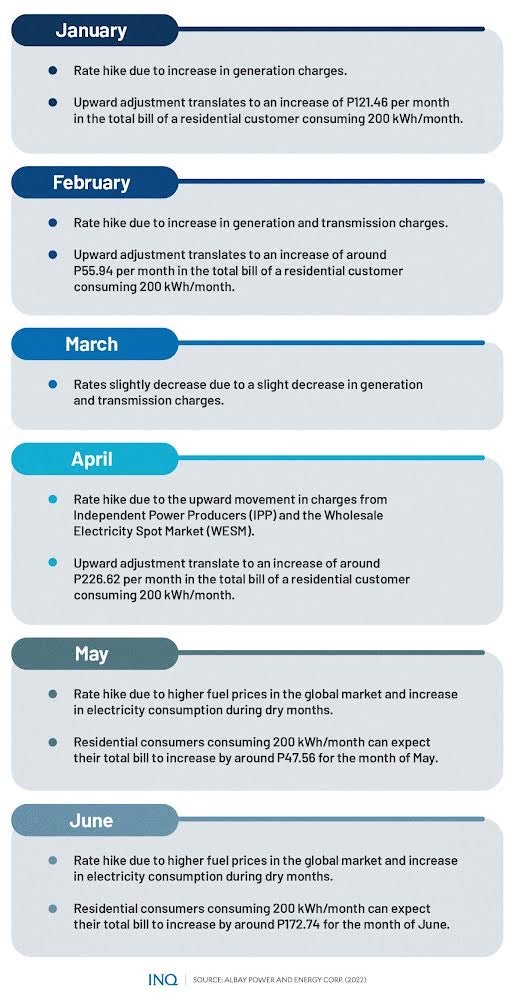 APEC has been remitting P2 million per month to NPC-Small Power Utilities Group (SPUG) for providing diesel-fed power to the island town’s 1,700 consumers and 72 barangay power associations even if the town’s residents had not been paying for their electric consumption.

Dennis Ilan, APEC deputy general manager, previously said that the customers in the island town has a total of P32 million debt due to unpaid bills since 2014—a year after APEC took over the management of the debt-ridden Albay Electric Cooperative in 2013.

However, Rapu-Rapu Mayor Ronald Galicia said that APEC was partly to be blamed because of its poor collection system in the town—which only has three payment centers for residents in 34 villages.

APEC, a subsidiary of San Miguel Corporation Global Power Holdings, has around 205,000 power subscribers spread in 15 towns and three cities of Albay.

Pat Gutierrez, APEC spokesperson, said last May that the firm owes NPC-SPUG P32 million. This is on top of the P4.2 billion that the firm owed San Miguel Energy Corp. (SMEC) where APEC gets its power supply, aside from the wholesale electricity spot market (WESM). 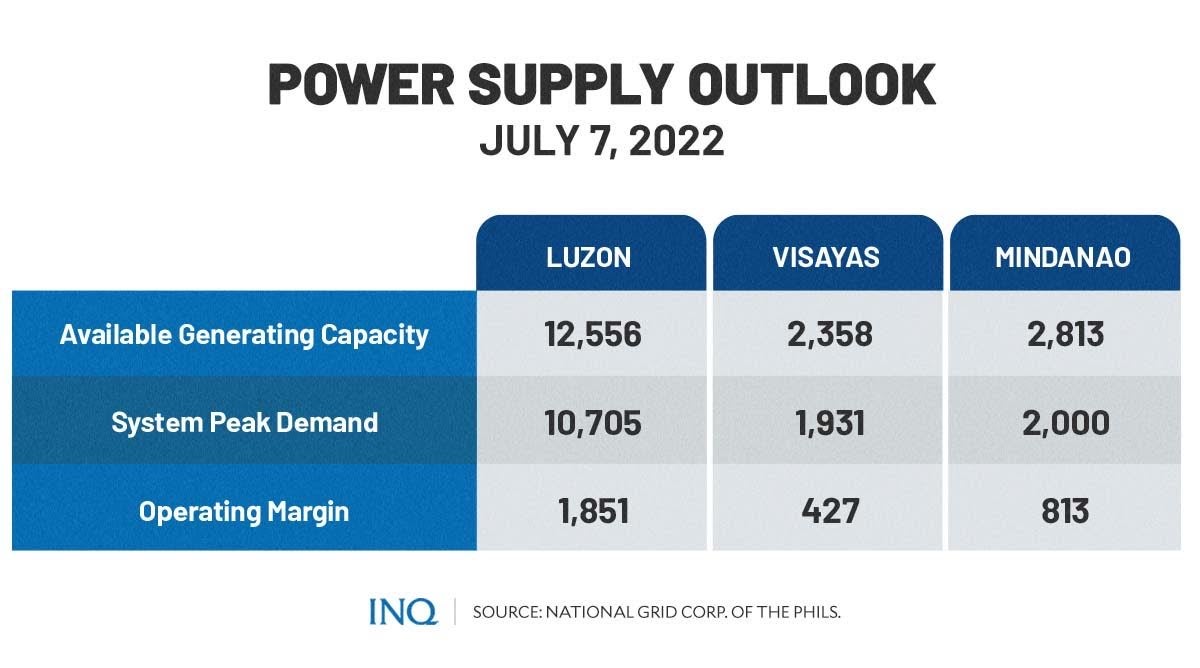 Gutierrez also admitted that APEC’s operation had been saddled by unpaid bills from 53,000 consumers, system losses caused by rampant pilferage, and antiquated transmission lines and stations.

According to her, the firm was losing around P142 million each month due to a 21 percent system loss and nonpayment of bills. The firm’s collection efficiency was also pegged at only 74 percent.

Amid the frequent power outages, the firm imposed consecutive increases for residential, commercial and high voltage rates this year—except in March—citing various reasons.

In January, the upward adjustment translated to an increase of P121.46 in the total bill of a residential customer consuming 200 kWh per month.

APEC said the rate hike was due to an increase in generation charges.

The following month, residential customers who consume 200 kWh per month saw a P55.94 increase in their bill due to the increase in generation and transmission charges.

In March, the rates slightly decreased due to lower generation and transmission rates.

However, rates went up again in April. The monthly bill of residential customers increased by P226.62, which the firm attributed to the upward movement of charges from Independent Power Producers (IPP) and WESM.

“The rate hike had been attributed mainly to the upswing in generation charges due to surging fuel prices in the world market, mainly coal, which is the dominant fuel in the country,” APEC said in a statement.

“Likewise, the transmission charge from NGCP slightly increased this month,” the firm added.

In May, the P47.56 increase in the bill of residential customers who consume 200 kWh was due to higher prices in the global market.

Up until June, the rate hike continued, with a P172.74 increase in the monthly bill of a residential customer who consumes 200 kWh per month—still due to high fuel prices in the global market.

APEC also attributed the rate hikes in the months of May and June to higher consumption of energy during the dry months.

Inquirer.net tried to reach out to APEC for comments but the firm has yet to respond as of this posting.