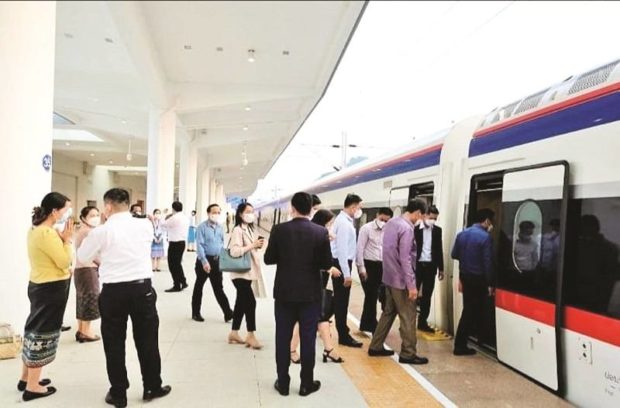 People board a train on the Laos-China railway. | PHOTO: Vientiane Times/Asia News Network

VIENTIANE — Operators of the Laos-China railway have recorded over 400,000 passengers in the past six months, while more than 600,000 tons of freight has been shipped across the Laos-China border.

The railway has been a huge turning point for Laos’ international transport network and its role in freight transport is becoming increasingly important. The Laos-China Railway Company Ltd. said 410,000 people travelled on the railway and 640,000 tons of goods have been transported across the border between Laos and China. Four passenger stations were operational when the railway first came into service, at Nateuy, Kasy, Meuang Nga and Namor. There are now 10 passenger stations in operation.

Another high speed EMU train, named “Lane Xang,” and a standard train were put into service, so that more passengers can be carried and they have more choice in ticket price.

Trains run an average of six times a day, with a maximum of eight journeys a day, when a maximum of 5,000 passengers can be carried. Tickets can now be purchased in advance of travel and ticket outlets have been installed in major cities to make purchases easier.

As the number of passengers and train stations has grown, the number of people using the train to travel to Vientiane, Vangvieng, Luang Prabang and other popular visitor destinations in Laos has increased significantly.

The railway has created a convenient international transport link between China and Asean, greatly reducing the time and cost of transport. According to the Regional Comprehensive Economic Partnership Agreement, which entered into force in January, the demand for freight transport between China and Laos is growing.

As a result, freight stations have opened at South Vientiane, Nateuy, Vangvieng, Luang Prabang and Phonhong to facilitate the shipment of more goods.