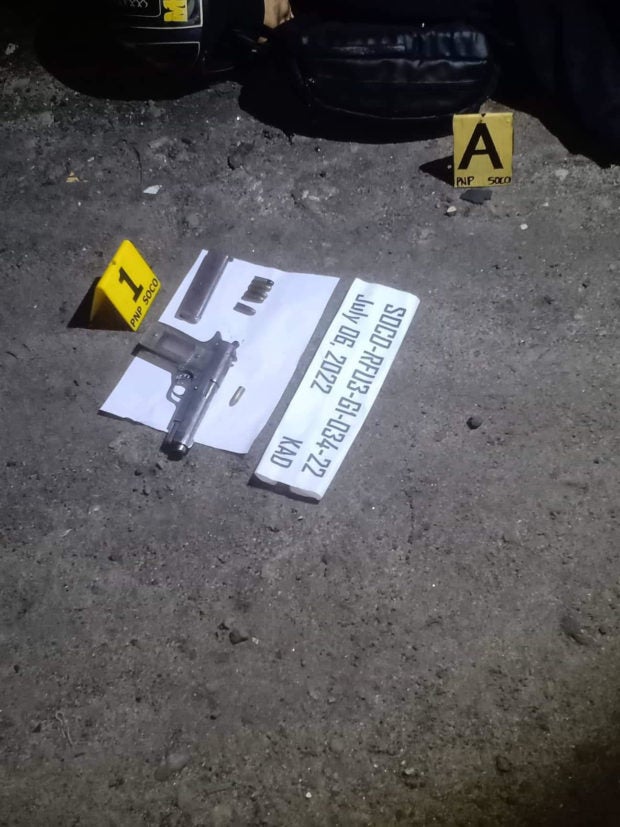 The 9mm-caliber pistol allegedly used by the robbery suspect who was killed in an exchange of gunfire with policemen in Angeles City on Wednesday (July 6). PHOTO FROM ANGELES CITY POLICE

In a statement, city police director Col. Diosdado Fabian identified the slain suspect as Eduardo Ocampo, of legal age and a resident of Santo Rosario village.

He said around 10:10 pm on Wednesday, Police Station 2 received a complaint from a 26-year-old man against a robber on board a motorcycle who held him up at gunpoint and took his mobile phone and wallet containing P5,000 in cash.

The victim said he was walking along Sampaguita Avenue in Pampang village when the man, who wore a dark blue jacket with a “Vanz” emblem and “Jordan” jogging pants, robbed him. The suspect was also seen riding a black Honda Click motorcycle without a license plate.

The police station immediately sent an alarm to the city police’s operation center for the apprehension of the suspect.

Policemen spotted a motorcycle-riding man that matched the suspect’s description in Pampang village and tried to accost him. But the suspect allegedly tried to evade the lawmen and hot pursuit followed.

Investigators said the suspect was cornered in Barangay Pampanga, Angeles City and opened fire at police. A brief gunfight ensued, leading to the killing of the suspect, police said.

Found in possession of the suspect were a 9 mm pistol with ammunition, a sling bag with 12 packets of shabu (crystal meth), his alleged victim’s mobile phone and the wallet with P5,000 in cash. Police said four 9mm bullet casings were found at the scene of the gunfight.

The suspect was identified through his driver’s license.