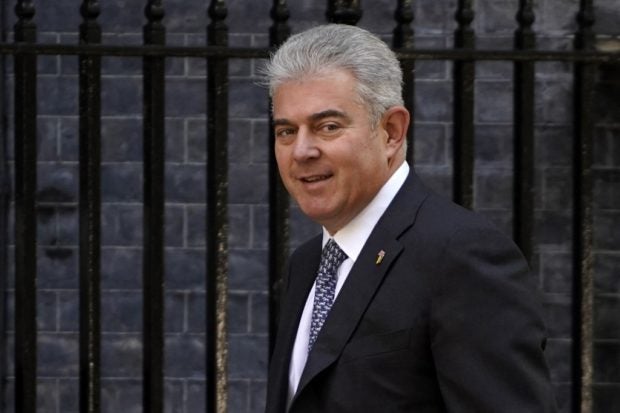 London, United Kingdom — Northern Secretary Brandon Lewis on Thursday announced his resignation, telling Prime Minister Boris Johnson that his scandal-hit government was “past the point of no return.”

Lewis’s resignation, in a letter that he published on his Twitter account, makes him the third senior member of Johnson’s Cabinet to quit since Tuesday.

Several others followed early on Thursday morning, with increasing calls for Johnson to go himself.

Lewis leaves the post he has held since early 2020 at a tricky time, with London seeking to change the terms of the deal it signed with Brussels to govern post-Brexit trade in Northern Ireland.

He said he had not taken the decision lightly but added: “I cannot sacrifice my personal integrity to defend things as they stand now.”

“It is clear that our Party, parliamentary colleagues, volunteers and the whole country deserve better,” he added.

Lewis was among a delegation of senior Conservative ministers who met the embattled Johnson on Wednesday night to tell him his time was up in Downing Street.

But he refused, reacting by sacking senior minister Michael Gove who first told him he had to resign for the good of the Tory party and the country.

Johnson has been battered by waves of scandal in the last six months particularly, not least revelations that government officials held parties that broke lockdown rules in Downing Street.

But the tipping point came over the last week, with claims that Johnson appointed a senior colleague despite knowing about sexual assault allegations against him.

By trying to cling to power, he was acting in a “Trumpian style,” he told BBC radio, adding that he should step down.