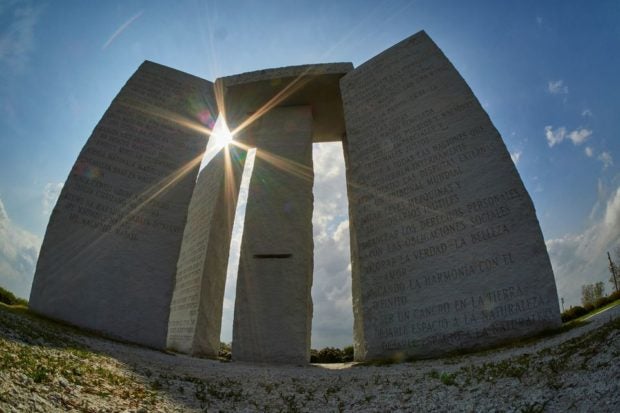 A large portion of the structure was destroyed before dawn on Wednesday when “unknown individuals detonated an explosive device,” the Georgia Bureau of Investigation (GBI) said on its Twitter feed.

The collection of gray monoliths was erected in 1980 in the middle of a large field near the town of Elberton, Georgia, off Highway 77, and is listed as a tourist attraction by the state’s travel site and the Elbert County Chamber of Commerce.

The GBI said the Elbert County Sheriff’s Office, which has joined it and other agencies investigating the incident, discovered the damage when its officers responded to the blast.

Few additional details were provided, and it was left unclear whether authorities observed the explosion themselves or whether it was seen or heard by others and reported to police.

Aerial footage posted online by South Carolina-based WHNS-TV show one of the structure’s five monoliths crumbled into jagged pieces strewn about the ground, and a chunk of the monument’s roof broken off at one corner. A large number of investigators and their vehicles were visible at the scene, about 100 miles (160.93 km) east of Georgia’s capital. 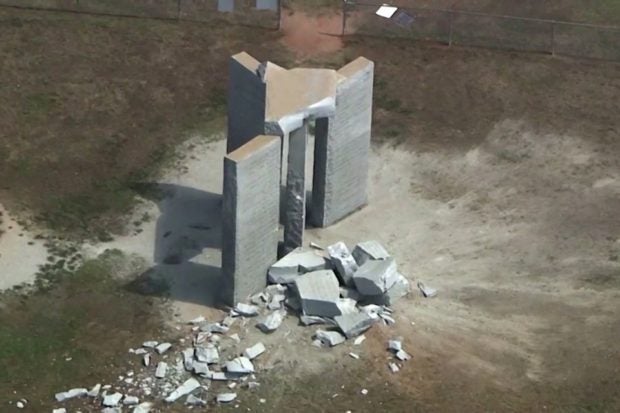 Rubble is cast around the Georgia Guidestones after an explosion in Elberton, Georgia, U.S., July 6, 2022 in a still image from video. ABC Affiliate WSB-TV via REUTERS

Before it was vandalized, the 19-foot-tall monument consisted of one upright slab at the center of four larger tablets arranged around it, with a large rectangular capstone lying on top of the others.

The state tourist website ExploreGeorgia.org says the Guidestones function as an astronomical calendar, arranged to let sunlight shine through a narrow hole in the structure daily at noon to illuminate the date on an engraving.

According to a chamber of commerce translation of the inscription, the message calls, in part, for all humanity to limit its numbers to fewer than a half-billion people “in perpetual balance with nature” and for all nations to “avoid petty laws and useless officials.”

Official descriptions say the origins of the monument are shrouded in mystery. But a 2009 Wired magazine article reported the Guidestones were the brainchild of a man who used the pseudonym Robert C. Christian to commission a local granite finishing company to produce the monument on behalf of a “small group of loyal Americans.”

The Elberton Granite Association, which maintains and preserves the stones, has put the cost of replacing them at hundreds of thousands of dollars, WHNS reported.

Both the chamber and ExploreGeorgia.org say the monument is known as America’s Stonehenge, but at least one other human-made U.S. rock formation bears that moniker, an archeological site of stone structures in Salem, New Hampshire.

And it pales in age and grandeur to the original Stonehenge, a prehistoric landmark on the Salisbury Plaine in Wiltshire, England, believed to date to as early as 3000 BC.

‘We don’t seem to learn’: Beirut explosion echoes US tragedy

Inside US raid on ISIS leader: Months of preparation, then a deadly blast