Aquino back to work; to attend PMA graduation 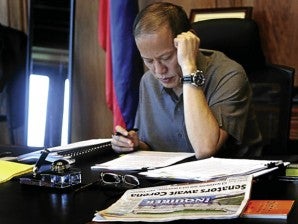 TAKE NOTE President Aquino is hard at work in his office in Malacañang on Thursday after skipping a packed schedule on Wednesday as he was unwell. MALACAÑANG PHOTO BUREAU

President Benigno Aquino III was feeling much better Thursday a day after he was under the weather and thus, had to work from home.

Presidential spokesperson Edwin Lacierda said that there was “nothing serious” with the President but as of press time he said he had no information yet on what had ailed the Chief Executive the other day.

“Yesterday (Wednesday), he wasn’t feeling well and that’s why he failed to attend (his meetings) and he worked from home,” Lacierda said. “Now, he is recovering but he is up and about and that’s the reason why he has a schedule (Thursday). So I’m sure he’s going back to work.”

Indeed, the 51-year-old President was well enough Thursday that he not only attended his daily briefing and staff meeting and met with Executive Secretary Paquito Ochoa Jr., but also took time to attend a Mass at Manila Memorial Park in Sucat, Parañaque City, with his sisters.

On Wednesday, Mr. Aquino had to ask Budget Secretary Florencio Abad to represent him in a scheduled courtesy call on him by officers of Integrity Initiative.

Not seen for a week

Mr. Aquino’s other schedule for that day, meeting with the National Commission on Muslim Filipinos, was canceled.

Reporters had not seen Mr. Aquino this week since his activities—which consisted mostly of meetings with officials—were all held inside the Palace.

He is scheduled to make a public appearance Friday at the Climate Change Commission’s launching of an electric bus. The bus will be driven on Palace grounds.

On Sunday, Mr. Aquino is scheduled to attend the commencement exercise of the Philippine Military Academy at Fort Gregorio del Pilar in Baguio City.