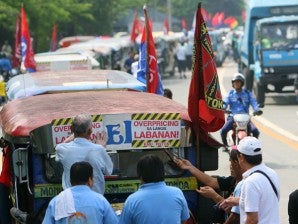 What’s in a name?

“We regret the fact that a number of schools had to cancel classes because we never intended to stage a strike in the first place,” said George San Mateo, national president of Pagkakaisa ng mga Samahan ng Tsuper at Opereytors Nationwide (Piston).

“That’s why he is trying to get ahead because I would supposedly say this afternoon that the transport strike fizzled out,” he added.

Lacierda said it wasn’t the national government that announced the cancellation of classes but local government units, universities and colleges.

In anticipation of the protests, the city governments of Pasay, Quezon City and Taguig and Pateros town suspended classes from preschool to high school, while San Juan and Parañaque cities suspended classes on all levels.

However, the traffic situation throughout Metro Manila remained normal throughout the day, according to the Metropolitan Manila Development Authority (MMDA).

Many drivers of buses, jeepneys and other public vehicles went on with their daily routine to ferry passengers from one point to another.

In Metro Manila, Piston’s caravan proceeded to the offices of oil firms in Makati City from Quezon City Memorial Circle.

The caravan, with 18 jeepneys, seven FX taxis and some motorcycles, arrived at the headquarters of Chevron at 6750 Building on Ayala Avenue in Makati at around 11 a.m. where they were met by about a hundred policemen, armed with shields.

San Mateo said the protesters were not out to paralyze transportation, but to call for a rollback in oil prices, the junking of the Oil Deregulation Law, and the setting aside of the 12-percent value-added tax (VAT) on petroleum products.

The group then staged a noise barrage, banging on a number of empty oil and water drums and empty LPG cylinders.

At around 12:45 p.m., the group arrived at the Shell offices on Valero Street, also in Makati, where they held a program. San Mateo, together with some 20 other protesters, taunted Tolentino, who earlier warned that traffic disruptions would be punished.

They stopped traffic along Valero Street by lying in the middle of the road for at least five minutes. The protesters packed up at around 1:30 p.m., saying they will hold local protests in several areas in Metro Manila at 5 p.m.

Sought for comment, Tolentino said the protests were mostly peaceful. “As for the protesters who stopped traffic along Valero Street, it is up to the Makati Police if they will file charges,” he said.

Superintendent Federico Castro Jr., deputy chief of the Southern Police District (SPD) for operations, also noted that there was no disturbance brought about by the protests. “In fairness to them, the rallies were generally peaceful,” he said.

Castro said the SPD also monitored small protests with up to 60 protesters in Alabang, Baclaran, Taguig and other areas south of the metropolis.

The MMDA also monitored protests building up at the northern end of Edsa near Trinoma Mall.

Simultaneous transport caravans and protest actions were also held in parts of Laguna and Cavite provinces.

In Laguna, a 100-jeep convoy left this town past noon for a caravan along the first and second district towns of the province.

Another jeepney caravan was conducted between the towns of Sta. Cruz and Victoria while around 50 students from the University of the Philippines in Los Baños conducted a parallel protest.

“From March 1 to 8, the price of diesel increased twice by 50 and 60 centavo per liter, while the cost of LPG (liquefied petroleum gas) was already hitting P800 just during the first quarter of 2012,” said Fuentes.

In Cavite, Emmanuel Asuncion, provincial secretary general of Bayan, said close to 100 drivers plying the Baclaran-Imus route, participated in the caravan on Zapote flyover in Bacoor and in Barangay Tanzang-Luma in Imus without disrupting public transportation.

“The public was misinformed of a transport strike when in fact it was just a transport caravan. The government spread lies to create a negative impression against our drivers,” he said.

A 30-vehicle caravan led by Piston-Panay in Iloilo City kicked off at around 1:30 p.m. in Mandurriao District and passed through major streets in the city before dispersing along Bonifacio Drive.

Drivers and operators of public jeepneys and taxicabs from the city and neighboring towns and members of militant organizations joined the caravan.

Edgar Salarda, Piston-Panay coordinator, said transport groups were demanding a rollback of at least P9 per liter which they claimed was equivalent to the “overprice” being imposed by oil companies.

“We are reeling from continued price increases which have reached P10 per liter since February last year. We do not have anything left for our families after we pay jeepney rental and fuel expenses,” Salarda said.

In the capital town of Kalibo in Aklan, around 50 protesters led by Bayan joined a picket at the Crossing Banga.

At least 300 members of the United Negros Drivers Operators Center staged a rally in front of the Fountain of Justice on Araneta Street in Bacolod City .

At the count of three, they threw red paint at an effigy of President Aquino which was installed near the depot gate.

They called the oil price increases a plague while workers’ wages remained the same.

Some of the protesters, mostly women belonging to the militant organization Gabriela, did the “planking,” as the rest of the group sounded the noise barrage, still calling for a stop to the oil price increases.

Edil Gonzaga, chair of Piston, said the government was acting as “spokesperson” of the oil industry to justify the price increases by Petron and Shell.

“Is that because the owner of Petron is Danding Cojuangco, the uncle of President Noynoy Aquino?” he asked.