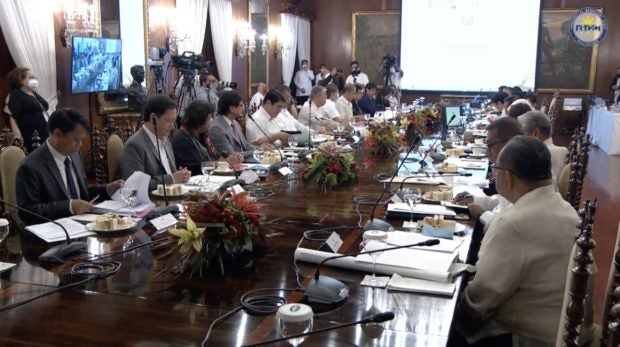 MANILA, Philippines — President Ferdinand Marcos Jr. on Tuesday said that one of his first directives to his Cabinet is to streamline the bureaucracy.

In his first meeting with Cabinet members, Marcos Jr. said he gave secretaries a “relatively free hand” in building their respective departments.

“Let’s get our bureaucracy streamlined. I gave them… a relatively free hand in deciding who you want to hire and how you want to change the structure of your department if indeed that’s what you want to do, but do it soon because we have work to do and we have to go to work immediately,” he said in his first Palace briefing when asked about his marching orders to his Cabinet.

He said he and his Cabinet members talked about immediate and long-term concerns in the government intending to streamline the government.

He said he wants his administration to be well-coordinated with each other, so he wants every department and agency to already have a “plan in mind.”

“We have to realize how interconnected all the government is. Everything that’s done, on one hand, affects the government in another place, sometimes not to its advantage. So we have to be careful about doing all of that properly,” he said.

Also, during their first Cabinet meeting, Marcos Jr. said the economic team was able to present “the general principle that they would like to do.”

Vice President Sara Duterte, who also serves as the chief of the Department of Education, could also present her ideas about returning face-to-face classes to full capacity by November.

Marcos Jr. also said that he was able to talk to the Department of Transportation “at great length” on plans to support the return of in-person classes.

“It’s important to me that the entire Cabinet understands what it is we are trying to do, how we are going to do it, what the timetable is and how it all fits together and that’s what we made a good start on today,” he said.