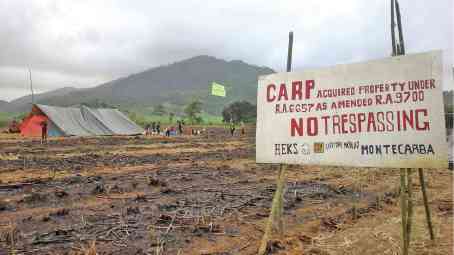 FILE PHOTO: Farmers on this land in Capiz find titles issued to them by the government to be useless against attacks by groups opposing agrarian reform. —CONTRIBUTED PHOTO

Citing the “defects” of previous agrarian reform policies, the Makabayan lawmakers, with the support of former agrarian reform secretary Rafael Mariano and other peasant and fisherfolk leaders, refiled the Genuine Agrarian Reform Bill (GARB) or the Free Land Distribution Act of 2022.

“This bill answers the demand of Filipino farmers for free land distribution and social justice. GARB, in essence, corrects the historical defects of Presidential Decree No. 27 (PD 27) enacted by the regime of Marcos Sr. in 1972 and the Comprehensive Agrarian Reform Program (CARP) and its successor CARPER,” Mariano said in a statement.

“We do not want another PD 27 or CARP Phase 2. We need a genuine agrarian reform program that will implement free land distribution to farmers and provide support services to farmers, especially at this time of severe economic crisis,” he added.

Mariano pointed out that “for the past 15 years and several Congresses, we have been filing and lobbying for GARB as landmark legislation that seeks to address the root causes of the social strife arising from landlessness and rural poverty.”

Farmers’ group Kilusang Magbubukid ng Pilipinas (KMP), meanwhile, said that PD 27 only covered tenanted rice and corn lands and allowed a seven-hectare retention limit, resulting in the exemption of some 55 percent of Filipino tenant-farmers and 44 percent of the total rice and corn lands from land reform coverage.

“While [President Ferdinand] Marcos Jr. blazons the supposed economic progress achieved during his late father’s dictatorial rule, it is essential to highlight that PD 27, the supposed cornerstone of Marcos Sr.’s New Society, was a colossal failure,” KMP said in the same statement.

In relation to the “inherent defects” of other agrarian laws, the group said the CARP automatically exempted educational institutions and military reservations from the distribution of agricultural lands.

Citing corporate schemes and arrangements, it added that the CARP exempted vast tracts of landholdings from actual distribution to farmer-beneficiaries.

“Owing to the inherent defects of PD 27, CARP, and CARPER, together spanning half a century, the implementation of these agrarian laws has been a monumental disappointment,” KMP said.

“Such land reform programs failed miserably to address the landlessness of the peasant masses for which it was professedly enacted to resolve. It failed to break up the land monopoly of big landlords and foreign agro-corporations over vast tracts of lands at the detriment of millions of landless toiling peasants, and at the expense of genuine national economic development,” it added,

The Department of Agrarian Reform from 1972 to June 2021 acquired and covered only 4,840,981 hectares of agricultural land, which leaves vast private agricultural lands “in the hands of big landowners and foreign plantations,” said KMP.