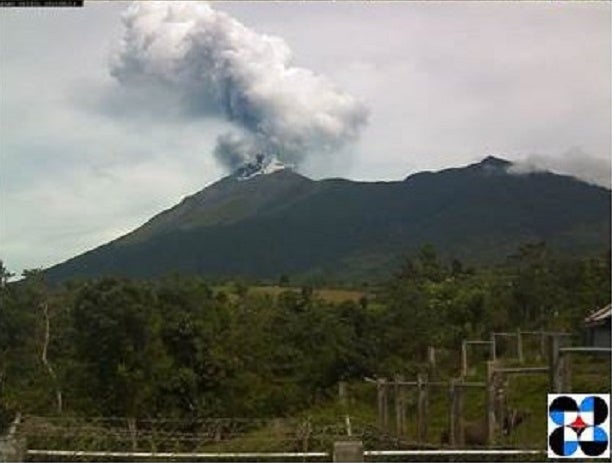 MANILA, Philippines — Despite a slight decrease in the recorded volcanic earthquakes at Kanlaon Volcano in Negros Island, state volcanologists still warned the public of a possible phreatic that may occur due to its heightened activities.

On Tuesday, the Philippine Institute of Volcanology and Seismology (Phivolcs) said its instruments monitored 17 tremors with magnitudes ranging from 0.6 to 1.1 in the past 24 hours.

This figure shows a downturn from the 21 volcanic tremors reported Monday.

(These are small events but often occur in the edifice of Kanlaon, while others are monitored near the crater.)

He added that among the volcanic earthquakes, 12 emitted energy strong enough to be plottable on the map.

Phivolcs also said that Kanlaon Volcano was releasing 151 tons of sulfur dioxide per day, while its plume drifting northwest rose to 300 meters tall.

Clarito noted that while seismic events in the volcano have decreased, other variables are still being considered in assessing the Kanlaon Volcano.

(Elevated seismic activity and ground deformation data have been monitored in the Kanlaon Volcano and even if it remains under Alert Level 1, a phreatic eruption is still possible because of its heightened seismic activity.)

Phivolcs earlier advised the public about an increase in seismic events in Kanlaon Volcano as it recorded 41 volcanic earthquakes from 5 a.m. of June 30 to 2 p.m. of July 3.

Since the volcano is still under Alert Level 1, Phivolcs reminded anew that entry into the four-kilometer-radius Permanent Danger Zone is prohibited, while going into the Extended Danger Zone must be done with vigilance. Flying an aircraft close to the volcano is also not allowed.