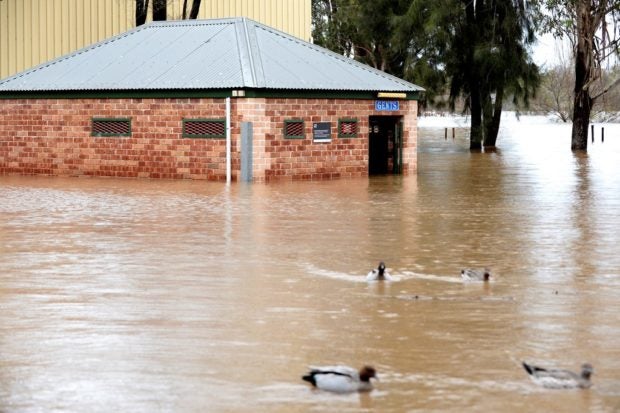 A general view shows a flooded area due to torrential rain in the Camden suburb of Sydney on July 3, 2022. (Photo by Muhammad FAROOQ / AFP)

Emergency services have now instructed about 50,000 people to evacuate or to prepare to escape the rising waters in New South Wales, officials said.

Emergency workers carried out 22 flood rescues in Sydney overnight, they said, with the support of 100 army troops deployed to the state.

Australia has been at the sharp end of climate change, with droughts, deadly bushfires, bleaching events on the Great Barrier Reef and floods becoming more common and intense as global weather patterns change.

“Sydney is not out of danger, this is not a time to be complacent,” State Emergency Services commissioner Carlene York told a news conference.

Meteorologists predicted the weather front would move northwards along the east coast after dumping rain on Sydney for four days.

With much of the ground already sodden, the water rose fast in worst-hit areas and was soon lapping around the walls of some homes in the western Sydney suburbs.

Many people affected have lived through successive east coast floods that struck in 2021 and then again in March this year when more than 20 people were killed.

“It is so fast, you can’t even get out that quick, you can’t even move anything,” resident Jenny Lee said after parts of her western Sydney suburb of Shanes Park were engulfed overnight.

“You only can get help, take pet dog out. That’s it,” she told AFP.

In the western suburb of Windsor, resident Tyler Cassel fled his rental home with his partner by paddling through the water in a yellow canoe.

The flood left his home sitting in a lake of water.

“It’s actually one of the scariest floods I have been a part of.”

Much of the flooding has occurred in a major river system downstream of western Sydney’s Warragamba Dam, which has been forced to spill large volumes of excess water since Sunday.

The huge concrete dam provides most of the city’s drinking water.

“We have had fires and… numerous floods over this period of time,” he told a news conference.

“Those orders ensure that we get people out safely,” Perrottet said.

“This event is far from over.”

The rain has eased in some Sydney areas but flood warnings will likely persist for days, warned Jane Golding of the state’s bureau of meteorology.