‘Weak surge’ in COVID cases over in 2 weeks, says Octa 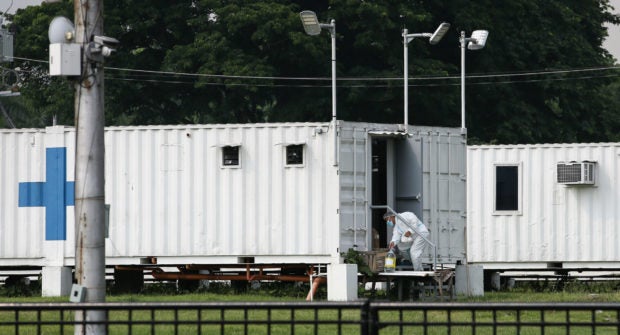 A health worker wearing a PPE suit brings inside some food and drinks left by the doorstep of a wing at the Manila COVID-19 Field Hospital. (File photo by LYN RILLON / Philippine Daily Inquirer)

MANILA, Philippines – The independent pandemic monitor Octa Research on Monday said the ongoing “mini” or “weak” surge in COVID-19 cases in Metro Manila and other parts of the country was likely to taper off in a week or two as the infection rates start to slow down.

Speaking at the televised Laging Handa public briefing, Octa fellow Guido David said the case counts and positivity rates in Metro Manila, Calabarzon (Cavite, Laguna, Batangas, Rizal, and Quezon), Pampanga, Benguet and Western Visayas were on the rise but showed signs these were slowing down.

“From what we see, the number of cases is increasing but not that high. We’re hoping that the peak will come within the next one to two weeks, which means that whatever the number of cases we reach [by then], there might be a downward trend [afterward]. But then again, these are just projections and these might change,” he said.

David said the situation in Metro Manila was “not alarming” yet as the healthcare utilization rate rose only to 23 percent from 22 percent while the average daily attack rate (Adar) was at 3.6, or lower than the Department of Health’s (DOH) benchmark of 6.

He said, however, that there were some Metro Manila local government units with Adar higher than 6.

David said the reproduction number also slowed down to 1.5-1.6 in Metro Manila and other areas, which meant that “more or less,” every two sick persons were infecting three others.

David said the downtrend was consistent with Octa’s predictions of a weak surge in July’s second or third week. Such surges also happened in countries where the more transmissible BA.4 and BA.5 Omicron subvariants have spread.

He said the current surge was “weak” compared to those which occurred last January, or the “first wave” of Omicron subvariants when cases reached 40,000 a day when the reproduction rate was 4 to 5, and last year when the Delta variant-driven infections peaked at 25,000 daily.

David said that fast-spreading subvariants might not be the only reason behind the increase in cases, but the people’s waning immunity and noncompliance with minimum public health standards.

He said people should continue taking steps to avoid catching and spreading COVID-19 since some remain vulnerable to it.

The DOH on Monday said an average of 1,057 new coronavirus cases were reported daily from June 20 to 26, which was 60 percent higher than the 662 seven-day average the previous week.

However, David said the daily cases in the past few days were “not concerning yet because they are far from the levels we saw [in the past surges].”

Of the 7,398 confirmed cases last week, only 19 were severe or critical cases.

Hospitalizations due to COVID-19 remained at a low level.

COVID-19 positivity rate up in Metro Manila, 9 other areas — OCTA