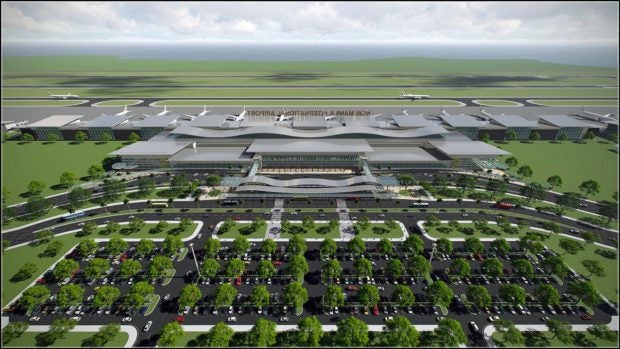 An artist’s rendition of the P734-billion New Manila International Airport that will rise in Bulakan, Bulacan. (SAN MIGUEL CORP.)

MANILA, Philippines — It’s not the end of the road for the vetoed bill granting tax perks to a proposed special economic zone adjacent to the P740-billion New Manila International Airport being developed in Bulacan province as its proponents may refile the measure with changes addressing President Marcos’ concerns, senators said on Sunday.

Press Secretary Trixie Cruz Angeles also said on Sunday that President Ferdinand Marcos Jr. fully supported the creation of the Bulacan Airport City Special Economic Zone and Freeport and his decision to veto House Bill No. 7575 creating it was meant to “cure the defects” found in the measure.

In a statement, Angeles said that had the President not vetoed HB 7575, it would have lapsed into law on Monday, or 30 days after the bill was sent by Congress to Malacañang.

“Presidential veto is the fastest way to cure the defects of HB 7575, especially the provision which exempts the Commission on Audit to look into the financial transactions on the special economic zone and freeport,” she said.

Sen. Juan Edgardo Angara, chair of the Senate finance committee, said there was still hope for the proposed Bulacan ecozone in the 19th Congress despite its surprise rejection by Marcos in one of his first acts in office.

“I’m sure the bill will be refiled by the author/s perhaps with some amendments as a result of the veto message,” the senator told the Inquirer on Viber.

“It won’t be the first time for a bill to take this path after being vetoed,” Angara said.

Sen. Aquilino Pimentel III, in a message to the Inquirer, also raised such a possibility with the caveat that “it should be fully discussed.”

Sen. Joel Villanueva, who will lead the Senate majority in the new Congress, said he recognized Marcos’ prerogative to reject the bill but admitted he was disappointed “as the proposal has the potential to create a lot of jobs for Filipinos.”

“We will carefully study refiling this bill, and even consider other possible proposals such as strengthening the Peza (Philippine Economic Zone Authority) law,” he said.

In the House of Representatives, Albay Rep. Joey Salceda asked Congress to consider crafting a new measure in lieu of the vetoed bill that would address the President’s concerns.

In a communication to Speaker Martin Romualdez, Salceda said Congress has two options on the veto: Override or reevaluate and revise or simply abandon the bill “taking the President’s concerns as serious infirmities.”

The Albay lawmaker proposed that the new bill explicitly state that the ecozone would be fully subject to the rules, procedures, and regulations of the Corporate Recovery and Tax Incentives for Enterprises (CREATE) Act and explicitly provide that the power of the ecozone to grant incentives would be a delegated power from the Fiscal Incentives Review Board.

The vetoed measure originated from the Lower House as House Bill No. 7575 and was sponsored in the Senate by Marcos’ sister, Sen. Imee Marcos, as the chair of the Senate economic affairs committee.

In a statement on Sunday, Sen. Imee Marcos said her younger brother’s veto of the bill she defended on the Senate floor “highlights the independence of the executive and legislative branches of government, which bodes well for a thorough treatment of national concerns under the Marcos administration.”

She said the Senate had hoped that the new Bulacan ecozone would generate jobs and income for communities still experiencing economic distress due to the pandemic.

The House passed the bill on Sept. 15, 2020, and the Senate followed suit on May 31 this year. On June 1, the House adopted the Senate’s amendments to the bill, forgoing a bicameral conference to reconcile differences between their versions.

The Bulacan project is being developed by San Miguel Corp., one of the country’s biggest conglomerates controlled by billionaire Ramon S. Ang.

The vetoed bill would have granted incentives to locators that invest and set up shop in the ecozone, the airport, the airport city adjacent to it and the adjoining lands later.

Meanwhile, a fisherfolk group on Sunday welcomed the President’s vetoing the bill creating the ecozone, but added that it “would only be laudable” if he repealed the entire project that allegedly threatened their livelihood.

“This will be laudable only if the San Miguel Aerotropolis project will be completely off from any negotiations. And until the displaced fisherfolk and coastal residents are able to return to their community which has been the target of the project,” said Bobby Roldan, national chair for Luzon of Pambansang Lakas ng Kilusang Mamamalakaya ng Pilipinas (Pamalakaya).