Cairo’s floating heritage risks being towed away by grand projects 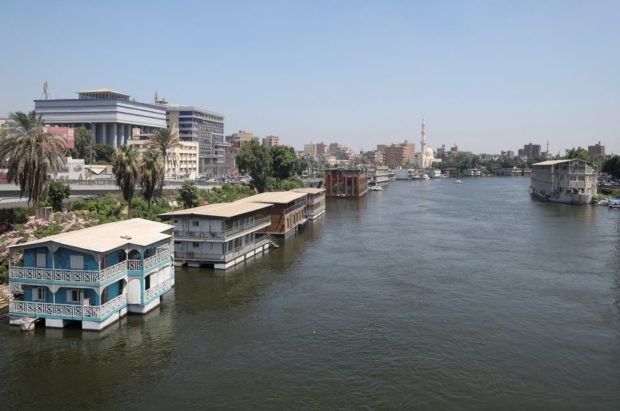 A general view of houseboats on sides of River Nile as authorities begin to remove what they say are unlicensed units from the Nile in the Egypt’s capital of Cairo, Egypt June 28, 2022. REUTERS

CAIRO — Dozens of vibrantly coloured floating homes have for decades dotted the banks of the River Nile, rare havens of leafy seclusion in the Egyptian capital’s hustle and bustle — but maybe not for much longer.

Residents of the 30 or so houseboats that remain moored on the banks of the Nile last week received eviction orders, giving them less than two weeks before their homes are taken away to be demolished.

“Buying this houseboat was my dream,” celebrated British-Egyptian novelist Ahdaf Soueif told AFP. “I furnished it to accommodate my grandchildren and spend my last days here.”

The boats have long occupied a special place in the Egyptian collective consciousness, having been the centrepiece of conversations in Nobel Prize laureate Naguib Mahfouz’s “Chitchat on the Nile”, as well as various classics from the golden age of Egyptian cinema.

But while many have campaigned to protect the houseboats for their historic value, the authorities have argued they are an eyesore standing in the way of the state’s grand development plans.

Residents have been offered no alternative accommodation or compensation, unlike others who previously faced evictions, and many have nowhere else to go.

For Manar, a 35-year-old engineer who poured everything into buying her houseboat four years ago, it’s a devastating blow.

“I sold my apartment, my father sold his car, and we used my two retired parents’ severance pay,” said Manar, who did not wish to give her full name.

“People from the slums have been rehoused, the state even moved graves when it built a road through a cemetery, but for us, nothing.” 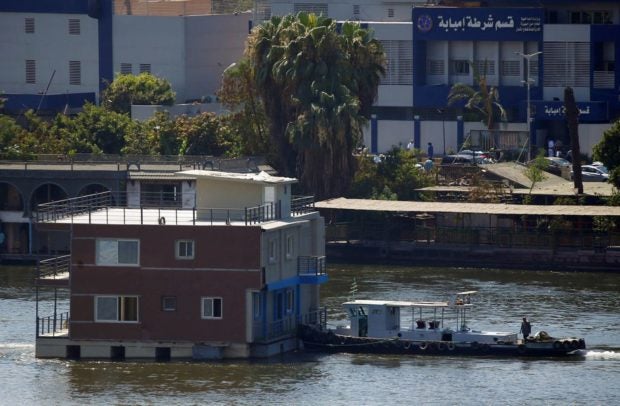 A government’s boat pushes a houseboat on the River Nile in front of Imbaba Police Station as authorities begin to remove what they say are unlicensed units in the Egyptian capital of Cairo, Egypt June 28, 2022. REUTERS

Barely a week after the eviction order, some boats have already been towed off and impounded in a state marina, despite petitions and campaigning, even by pro-government television pundits.

Soon, the sight of these houses, perched on metal caissons along the banks of the working-class neighbourhood of Imbaba opposite the upscale island of Zamalek, will only remain a memory.

The first warning came in 2020, when the governor of Cairo “suspended new houseboat parking authorizations”.

Residents had since received no news, until the eviction order came on June 20, leaving them “with no time to file an appeal”, according to one resident.

Adding to the pressures, authorities have been demanding parking and registration fees amounting to between 400,000 and one million pounds per residence ($21,000 to $53,000) — about 20 times more than previous annual fees.

Ayman Anwar, head of the state-affiliated Central Administration for the Protection of the Nile River in Cairo, said residents were given ample warning.

“In 2020, the state banned the use of barges as dwellings, because they are an uncivilised sight and pollute the Nile,” he said on a talk show this week.

The process echoes previous forced evictions and demolitions in Cairo’s central neighbourhoods, such as Bulaq and Maspero.

But while it may have started in poor informal settlements, the steamroller of development has now made its way into more affluent neighbourhoods and homes.

The only alternative appears to be to transform every houseboat into a commercial enterprise.

“At my age, to become a cafe manager?” exclaimed Soueif, who is in her 70s. “It’s forced eviction, no matter what you call it.” 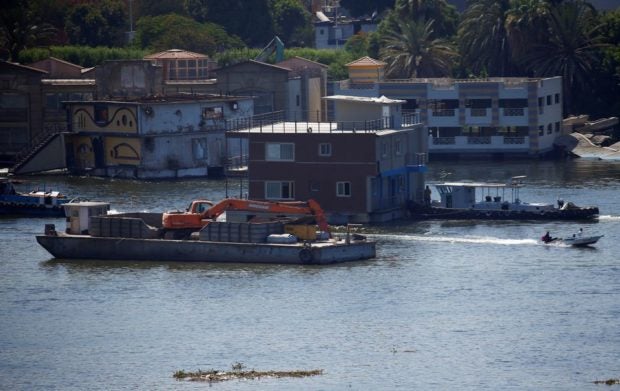 A general view as authorities work to move or remove houseboats on the River Nile what they say are unlicensed units in the Egyptian capital of Cairo, Egypt June 28, 2022. REUTERS

The banks of the Nile were once among the few public spaces where residents of Cairo –- a sprawling megalopolis of more than 20 million people –- could escape the din.

Dotted with cafes, visitors from across social strata would sip tea and juice by the water, for a modest price.

On the opposite bank of the Nile, the development Mamsha Ahl Masr (“the Egyptian people’s promenade” in Arabic) has drawn a lukewarm response.

The promenade is heralded by the state as one of many “megaprojects” launched by President Abdel Fattah al-Sisi and executed by the army, the crowning jewel of which is a sparkling new capital, rising out of the sands 50 kilometers (30 miles) east of Cairo.

“It’s a disaster,” Soueif said. “Every square inch must be profitable. There is no more public space, people can no longer be outside without paying.”

But the promenade, with its restaurants, a planned marina and open-air theatre, will “guarantee public access to the Nile”, the government insists.

Awad, who has lived with his family on their houseboat for 25 years, says “a square metre of commercial space is worth 1,000 pounds, so of course they’d rather rent the space out to cafes than keep us”.

“It’s tragic,” said Awad, who also did not wish to give his last name.

Now in his sixties, he laments the loss of “pieces of Cairo’s heritage” dating back to the times of the late King Farouk as well as Umm Kalthoum and Mounira al-Mahdiyya, iconic divas of the 20th century.

“It’s a lost cause. We can’t do anything, we are told that it’s a decision from above,” he said, cigarette in hand, gesturing towards the sky.