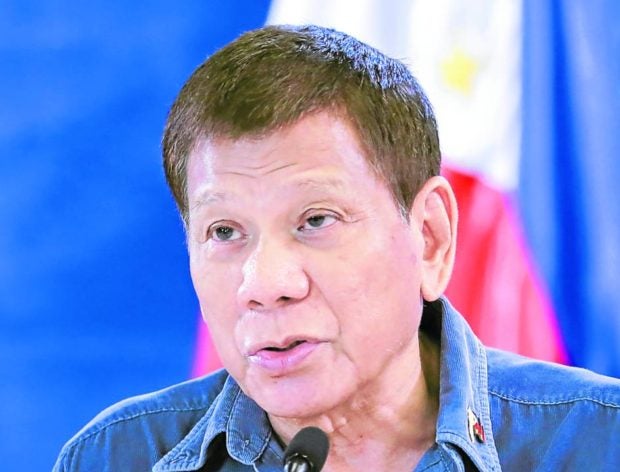 DAVAO CITY, Davao del Sur, Philippines — Finally free of his duties as the country’s chief executive, Rodrigo Duterte can finally let his hair down and have fun at a concert to be held in his honor at a mall here on Thursday afternoon.

The president is stepping down at noon on Thursday after a six-year term fraught with tension and conflict arising from his administration’s attacks on the press, brutal drug war, skirmishes with the Church and perceived critics, and the COVID-19 pandemic.

He can forget all about these the moment he sets foot in his hometown, where he practiced as a lawyer and honed his political skills, rising to become vice mayor, mayor (one of the longest in that position), congressman and President, and where he sometimes held Cabinet meetings during his presidency.

On Thursday morning, Duterte is scheduled to meet President-elect Ferdinand Marcos Jr. in Malacañang before he is given departure honors at the Kalayaan grounds, his last official event.

Marcos will be sworn in as the 17th President at the National Museum at noon.

A festive welcome awaits Citizen Rody Duterte in Davao City. A “homecoming concert” will be staged at NCCC Mall starting at 5:30 p.m., billed “Salamat Tatay Digong,” according to mall officials.

Admission is free. The show, to be hosted by social media personality and Duterte supporter Jam Magno, will feature The Dukes, R2K Band and Alia Santos, Nemrae Band, Donjie and Kervy Salazar, The Curve, and D’ Llanto Kids.

Whether he will be asked to sing his favorite ballad “Ikaw’’ is up in the air.

In February, Duterte said he had already begun packing his personal belongings in Malacañang and was looking forward to the day he would step down from office.

“I await the day of turnover, I will also experience the feeling of an outgoing President. I will be the one to meet the new president. Then I will invite him here for a tête-à-tête, and then that’s it, when I go out of the front gate, there’s nothing more,” he said then.

He said he would spend his retirement in his hometown, without going into specifics.

The 77-year-old Duterte bows out of politics with three of his children in power. His daughter, Davao City Mayor Sara Duterte, is the incoming Vice President; son Sebastian is the new city mayor, and eldest child Paolo is the House representative of the first district.

In his retirement, he can look back on his 36-year political career that began after dictator Ferdinand Marcos Sr., father of the incoming president, was ousted by a people’s revolt in February 1986, and Corazon Aquino was catapulted to power.

President Aquino plucked him from the National Prosecution Service in 1986 and appointed him as office in charge vice mayor of this city, then rocked by vigilantism and crime.

His first election victory came in 1988, as mayor. His long stint in office had been hailed for the maintenance of law and order, although this was attended by allegations of human rights violations.

Duterte’s campaign against illegal drugs in the city became a national template for his administration’s war on drugs after he was elected president in May 2016.

Duterte says he will speak out vs drugs, crime even in retirement