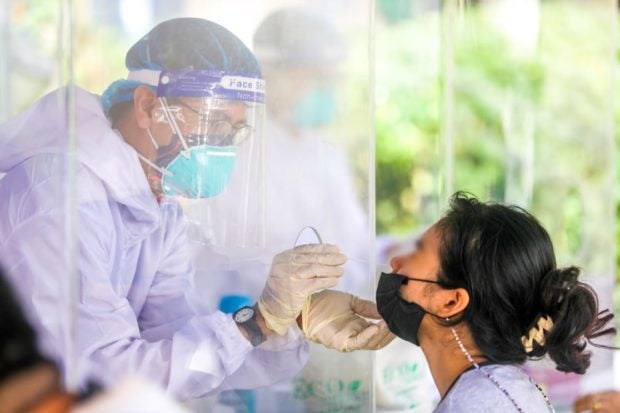 FILE PHOTO A volunteer medical frontliner from the Office of the Vice President’s Swab Cab administers a nose swab on a suspected coronavirus patient. Image from Facebook / VP Leni Robredo

He also noted that Metro Manila currently has a seven-day daily average of 342 cases.

David earlier reported that the positivity rate in Metro Manila rose to 5.9% on June 25 from 3.9% recorded in June 18.

Despite the increase in cases, David said this is not yet alarming because the figures are still low compared to previous COVID-19 surges.

He then urged the public to comply with the minimum public health standard and get the primary vaccine series and booster shots.

(This is not yet alarming. This is low compared to previous surges. We just need to be careful, still.)

Metro Manila and several other areas will remain under Alert Level 1 until July 15, Malacañang has announced.