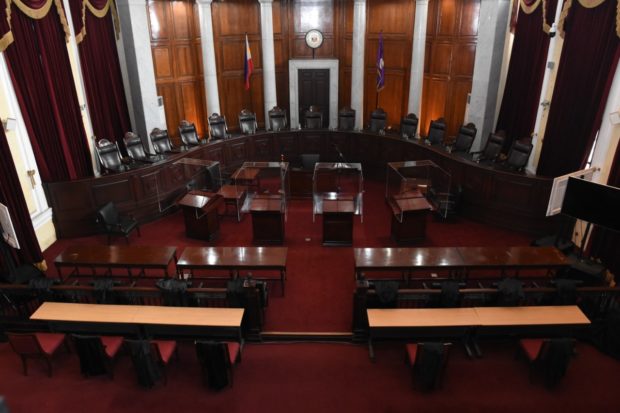 FILE PHOTO: Inside the Supreme Court session hall for the oral argument on the Anti-Terrorism Act. Photos from SC Public Information Office

During Tuesday’s en banc (full court) session, 13 justices voted for the dismissal of the petitions for disqualification and cancellation of Marcos Jr.’s certificate of candidacy (COC).

The decision was written by Associate Justice Rodil Zalameda.

There were two petitions filed before the SC – one for disqualification and another for the cancellation of Marcos Jr.’s COC.

The petition filed by Fr. Christian Buenafe, Fides Lim, Ma. Edeliza Hernandez, Celia Lagman Sevilla, Roland Vibal, and Josephine Lascano – aside from asking the SC to issue a temporary restraining order (TRO) to “enjoin and restrain” both houses of Congress from canvassing the votes of Marcos and proclaiming him as president” also assailed the January 17 and May 10 resolutions of the Commission on Elections (Comelec) dismissing for lack of merit their plea seeking the denial or cancellation of the COC of Marcos Jr. as well as their motion for reconsideration.

The other petition was filed by a group of martial law survivors led by Satur Ocampo and Bonifacio Ilagan, who also asked the SC to overturn the Comelec’s decision junking their disqualification case against Marcos.

Both petitions stemmed from Marcos Jr.’s 1995 tax case where he was sentenced to serve a total of seven years in prison and to pay a fine for violation of the National Internal Revenue Code.

In 1997, the Court of Appeals upheld the conviction but modified the penalty imposed by the lower court by removing the prison term and merely imposing a fine.

“The Court held that in the exercise of its power to decide the present controversy led them to no other conclusion but that respondent Marcos Jr. is qualified to run for and be elected to public office,” the SC Public Information Office said in a briefer.

The SC added that “his COC, being valid and in accord with the pertinent law, was rightfully upheld by Comelec.”