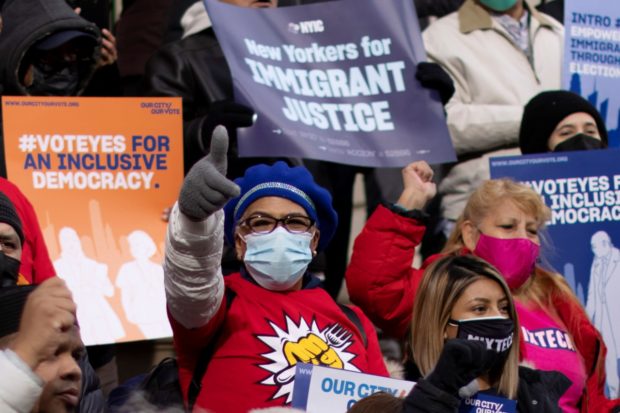 NEW YORK  — A New York state judge struck down a recent law on Monday that gave hundreds of thousands of noncitizen residents of New York City the right to vote in municipal elections for mayor and other local offices.

Judge Ralph Porzio, of New York State Supreme Court for Staten Island, ruled the law violated the state constitution, which says that “Every citizen” is entitled to vote.

The City Council, controlled by Democrats, passed the law last December, and it went into effect in January after both Mayor Bill de Blasio and his successor, Eric Adams, declined to either sign or veto it.

The measure would not have been a factor until next year’s elections for city council.

The law allowed an estimated 800,000 to 1 million noncitizens living in the city as lawful permanent residents of the United States or with U.S. authorization to work here to vote in elections for city office, including those for the mayor’s office and local council members, but not in state-wide or federal elections. There are about 6.7 million people of voting age in New York City.

The law required that a person must have been a resident of the city for at least 30 days prior to the election they wished to vote in, which critics of the law said was too short. Republicans opposed the law in part on the belief that a majority of immigrants are more likely to vote for Democrats.

Proponents of the law said it enfranchised the city’s huge population of noncitizens who pay taxes and contribute to the life and culture of a city that has long been a beacon for immigrants, as symbolized by the Statue of Liberty in New York Harbor.

Opponents, including the Republican Party and New York lawmakers who sued the city, said the law unfairly and unconstitutionally diluted the power of citizens’ votes and would harm politicians by forcing them to restructure their election strategies.

Both the City Council and the city’s law department, which could challenge the ruling in a higher state court, said the city was evaluating its options.

“By providing city residents with a voice in their local government representation, we provide them with an equal stake in the long-term success of our city,” Council Speaker Adrienne Adams and Shahana Hanif, chair of the council’s immigration committee, said in a joint statement. “Now more than ever, when our rights are being threatened, we need more civic and community engagement, not less.”

Michael Tannousis, a Republican who represents parts of Staten Island and Brooklyn in the New York State Assembly, was one of the plaintiffs who accused the council of trying to manipulate the electoral system.

“As the son of immigrants that came to this country legally and worked tirelessly to become citizens, I consider voting to be a sacred right bestowed on American citizens,” he said in a statement. “The idea that a person can move to New York City and register to vote after 30 days is preposterous and ripe for fraud.”

Read Next
Monkeypox case count rises to more than 3,400 globally, WHO says
EDITORS' PICK
Heads may roll at BOC, says Palace if sugar smugglers are allowed to use recycled import permits
Palace: Biggest supermarkets in PH commit to sell sugar at P70 per kilo
What to watch out for when selecting a video surveillance solution
House energy committee chair Arroyo bats for cheap electricity
vivo brings to the Philippines a powerful smartphone with a slimmer body, the vivo Y02s for only PHP 6,499
DOH reports increase in daily COVID-19 deaths, mostly unvaxxed
MOST READ
Brian Poe-Llamanzares receives his PhD in Public Administration
Peso loses ground vs US dollar
Alyssa Valdez to miss Creamline’s AVC Cup campaign
Rhian Ramos on new beau Sam Verzosa
Don't miss out on the latest news and information.