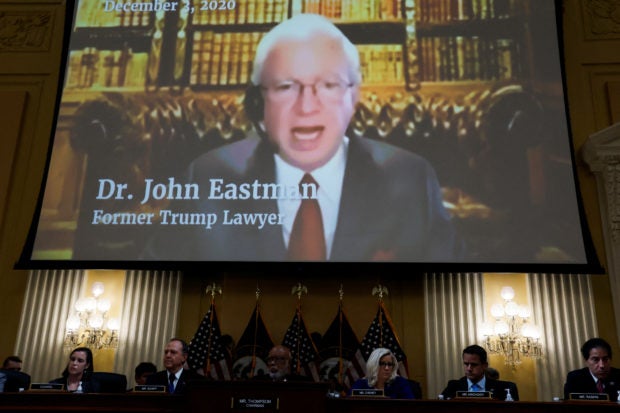 FILE PHOTO: John Eastman, former attorney for former U.S. President Donald Trump, is seen speaking in a video displayed above during the fourth of eight planned public hearings of the U.S. House Select Committee to investigate the January 6 Attack on the U.S. Capitol, on Capitol Hill in Washington, U.S. June 21, 2022. REUTERS/Jonathan Ernst

Eastman disclosed the search and seizure in a lawsuit he filed in federal court in New Mexico. In the lawsuit, Eastman asked a federal judge to tell the Justice Department to return his property, destroy records it had obtained and block investigators from being allowed to access the phone.

The FBI and the Justice Department did not respond to requests for comment on Monday.

“On the evening of June 22, 2022, federal agents served a search on movant while movant was exiting a restaurant,” the filing said. “Movant’s phone — an iPhone Pro 12 — was seized.”

The filing claimed that Eastman was “forced” to provide biometric data to open the phone.

He was not provided a copy of the warrant until after his phone was seized, according to the filing, which also claimed that the FBI agents appeared to be executing the warrant “issued at the behest” of the Justice Department.

Eastman in particular has been under intense scrutiny in relation to the probes into the Jan. 6, 2021 attack on the U.S. Capitol by Trump supporters after the former president falsely claimed that he had won the 2020 election.

Eastman spoke at the Jan. 6, 2021 rally where Trump gave a fiery speech alleging election fraud and urging supporters to march on the Capitol.

The House of Representatives Jan. 6 select committee has held five hearings on last year’s deadly attack and will hold a sixth one on Tuesday.