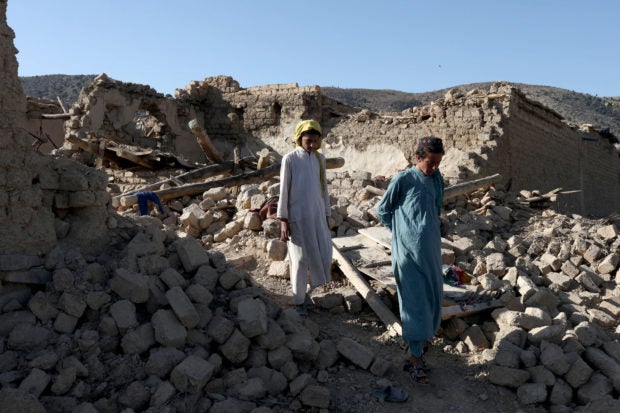 Afghan people walk through the debris of damaged houses after the recent earthquake in Wor Kali village in the Barmal district of Paktika province, Afghanistan, June 25, 2022. REUTERS/Ali Khara

KABUL — An Afghan aid agency appealed on Monday for cash for survivors of a deadly earthquake, saying it had no room to store food and had enough tents, and money for villagers to meet their particular needs would be most useful now.

Among the dead were 155 children, with nearly 250 children injured and 65 orphaned, the U.N. humanitarian office (OCHA) said.

The disaster is a major test for Afghanistan’s hardline Taliban rulers, who many foreign governments have shunned because of concern about human rights since they seized power last year.

In addition, sanctions on Afghan government bodies and banks have cut off most direct assistance for a country that was facing a humanitarian crisis, including famine, even before the 6.1 magnitude earthquake struck.

Nevertheless, the United Nations and several other countries have sent aid to the affected area. Turaby said the ARCS had no place to store food and they had enough tents for shelter.

He said cash would be more useful to survivors struggling to make ends meet and the ARCS could help distribute money if donors were worried about transparency.

The U.N. humanitarian office reported progress in its latest bulletin late on Sunday, saying a shortage of tents had been resolved and groups were distributing various aid including food, hygiene kits and cash.

However, it said several logistical problems remained including limited communications as a result of downed mobile phone networks and poor road conditions in some areas.

Read Next
24-hour operation yields more than P500,000 ‘shabu’ in Central Luzon
EDITORS' PICK
vivo brings to the Philippines a powerful smartphone with a slimmer body, the vivo Y02s for only PHP 6,499
Palace: Biggest supermarkets in PH commit to sell sugar at P70 per kilo
What to watch out for when selecting a video surveillance solution
Heads may roll at BOC, says Palace if sugar smugglers are allowed to use recycled import permits
House energy committee chair Arroyo bats for cheap electricity
DOH reports increase in daily COVID-19 deaths, mostly unvaxxed
MOST READ
Brian Poe-Llamanzares receives his PhD in Public Administration
Metro Manila’s No. 1 wanted man arrested, says NCRPO
Alyssa Valdez to miss Creamline’s AVC Cup campaign
DepEd to give teachers P5K cash allowance within first week of classes
Don't miss out on the latest news and information.