SCHLOSS ELMAU, Germany — The United States said on Monday it and its G7 allies planned further action to support Ukraine and sanctions against Russia over its invasion of its neighbor.

Washington said the G7 group of rich nations would issue a statement of support for Ukraine, including new sanctions commitments.

The United States said it would implement sanctions on hundreds of individuals and entities, adding to the more than 1,000 already sanctioned, target companies in several countries and impose tariffs on hundreds of Russia products. 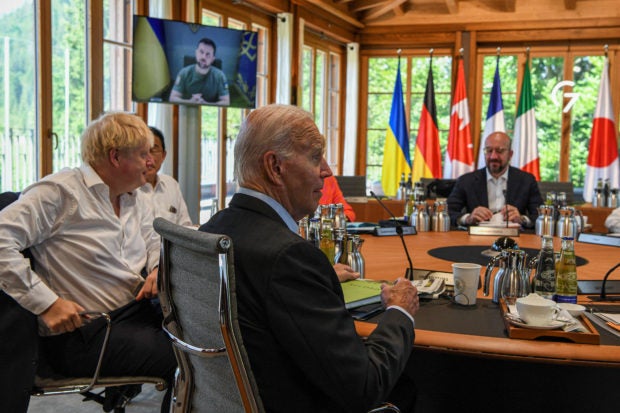 Following are some of the key measures:

G7 Leaders will align and expand sanctions to further restrict Russia’s access to key industrial inputs, services and technologies, particularly those supporting its armaments industrial base and technology sector.

The United States will implement a higher tariff rate on more than 570 groups of Russian products worth approximately $2.3 billion to Russia.

Biden and other G7 leaders will seek authority to use revenues collected by new tariffs on Russian goods to help Ukraine.

The United States will issue a determination to prohibit the import of new Russian gold into the United States, which will prevent Russian participation in the formal gold market. The G7 leaders will also commit to continue to target efforts by those engaging in sanctions evasion.

The U.S. Department of Commerce will also take its first action against companies engaging in “backfill” activities to help Russia get around Western sanctions by adding several companies around the world to its entity list. This will prohibit those companies from purchasing U.S-made goods and technologies, such as semiconductors.

G7 leaders will decide to impose sanctions on those deemed responsible for human rights abuses.

The G7 will commit to help Ukraine cover its short-term budgetary funding shortfalls, including a $7.5 billion commitment from the United States. Leaders will also make a long-term security commitment to providing Ukraine with financial, humanitarian, military and diplomatic support for as long as it takes.

TAGS: Group of Seven, Russia-Ukraine war, US sanctions on Russia