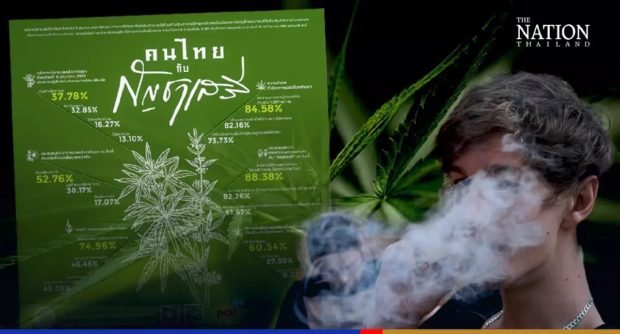 Most Thais are worried about the legalization of marijuana, and many believe it will do more harm than good, a recent opinion survey found. The Nation/Asia News Network

BANGKOK — Most Thais are worried about the legalization of marijuana, and many believe it will do more harm than good, a recent opinion survey found.

Suan Dusit Poll collected opinions from a random group of 2,390 people between June 20 and 23. The results were announced on Sunday by researcher Pornphan Buathong.

As for listing their concerns about the legalization of ganja, 84.58 percent said people still lack knowledge of correct usage, 82.16 percent are worried children will have easy access to the drug, while 73.73 percent pointed out that there is still no law regulating the use of marijuana. Respondents were allowed to choose more than one answer to this question.

As for ideas on what can be done to control consumption, 88.38 percent said children and youth should be prohibited from using the herb and it should not be available anywhere near schools. Meanwhile, 82.26 percent proposed that the authorities provide correct information about ganja and closely monitor its usage in public areas. Of the respondents, 81.67 percent also proposed a ban on exaggerated claims and ads related to marijuana.

Meanwhile, a resounding 60.54 percent believe the legalisation of marijuana is related to politics, 27.99 percent said it was “somewhat” related, while the remainder saw no link at all.

Thailand marijuana festival has visitors on a high